Back to the Garden – Sawyer Farm (Worthington) Lincoln Costa, co-founder 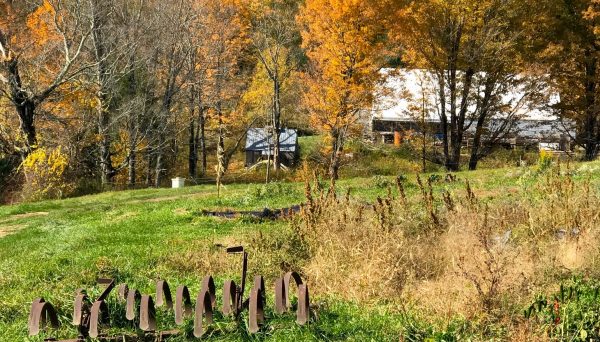 the sharp division between Work and Life is gone

A big part of wanting to get involved with working on a farm was noticing that people’s lives tend to be super-fractured: you go away to work at a place your kids don’t know about – you come home for dinner – and often the two are completely unrelated to each other. My wife Hillary (Hill) and I wanted to have an integration between what we did for work – and what we ate – and where the kids were – and the way we interacted with all that stuff. We were searching for a way to live which erased the sharp division between Work and Life. 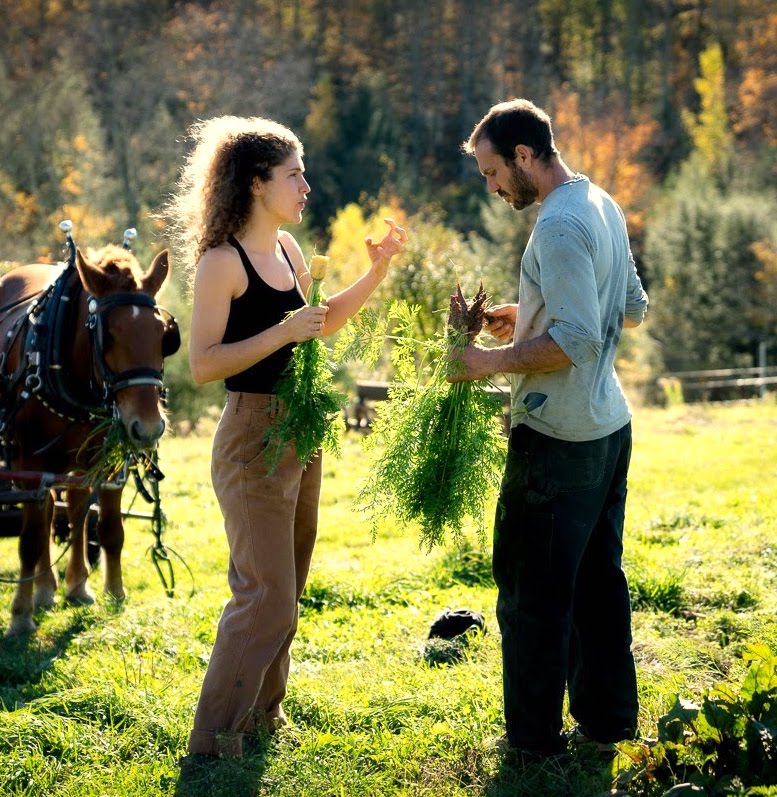 About 15 years ago Hill and I were living in NYC and I was teaching high school science, mostly biology, and Hill was working at a literary agency, working with authors to get their stuff published. I was teaching a high school class called “Science & Society” with a lot of Latino kids. There was a series in the NYT at that time about diabetes, which said that a third of Latino high schoolers were going to end up with Type 2 diabetes in their lifetime. It led us into thinking about nutrition – and the link between farming and global warming.

to live what I preach

So, one day I went outside to grab some lunch in a place where there were probably more food choices than almost anywhere in the world – and I realized that any of my choices would be contributing to erosion, global warming, nutrient leaching, chemical contamination, etc. So I felt trapped and hypocritical – complicit in supporting a system that I had just talked about in class as destroying the world. I just wanted to be able to know what it would be like to live what I preach; to grow my own food in a way that felt ethical and sustainable.

After homesteading on my parents’ property in north central PA for a while, we started searching for an area with more of a sense of community. We ended up finding a 40-acre farm in Worthington: 20 wooded acres and 20 open acres. 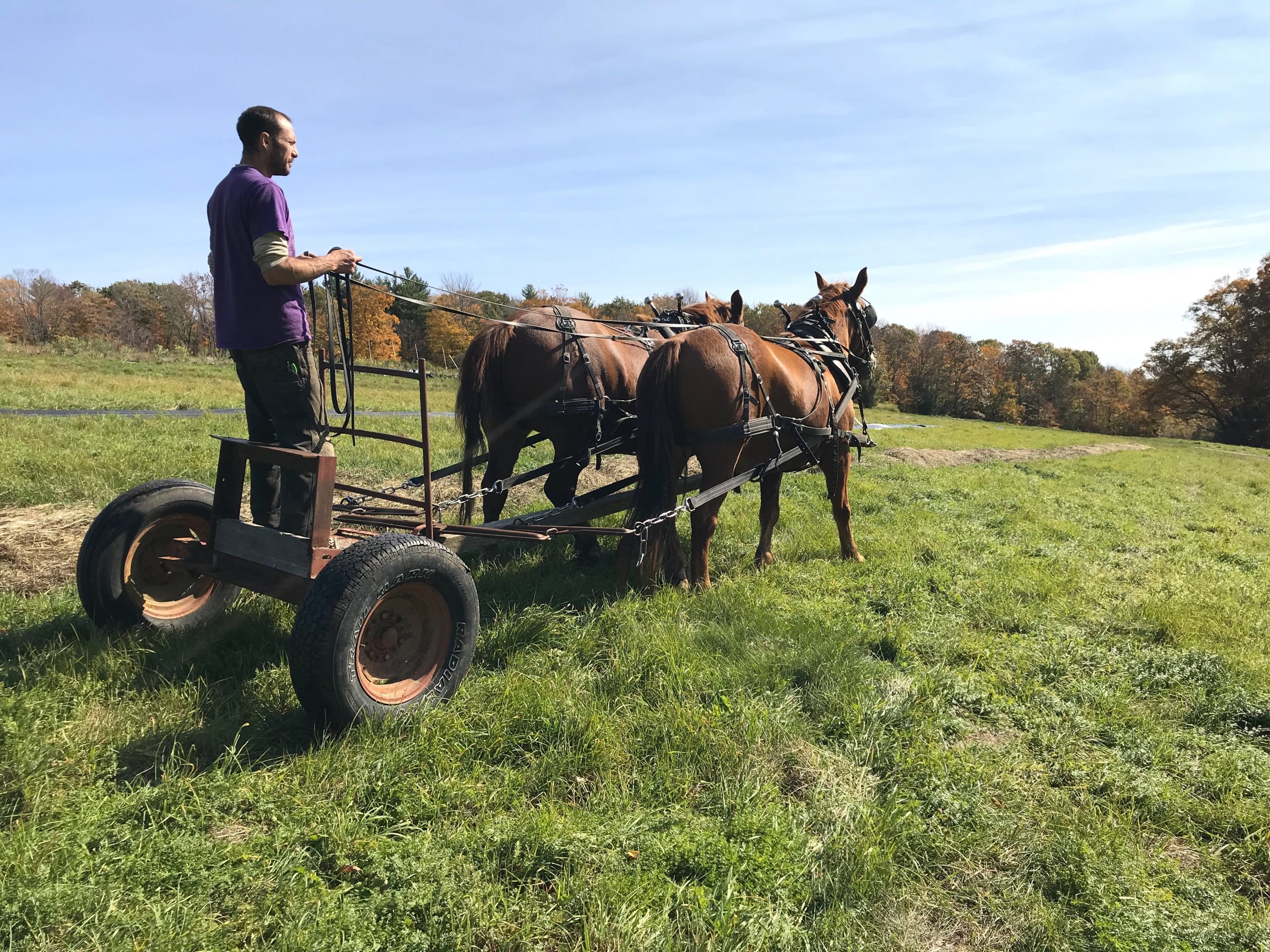 Lincoln with his horse-drawn farm equipment

we were led down this path by working with horses

We learned a lot about using actual horse power! (machinery drawn by horses) from an organic farm in PA, the Nordells. They were one of the first in this new wave of non-Amish horse farmers. Working that way is more time-consuming, but there’s just a lot of things about it that are enjoyable, because farm work is pretty repetitive. So you’ll be up there on the field alone – but you’re with these two animals who have their own thoughts – and there’s a constant engagement with them. It’s always interesting – there’s always something to pay attention to – so that’s the fun side of it. 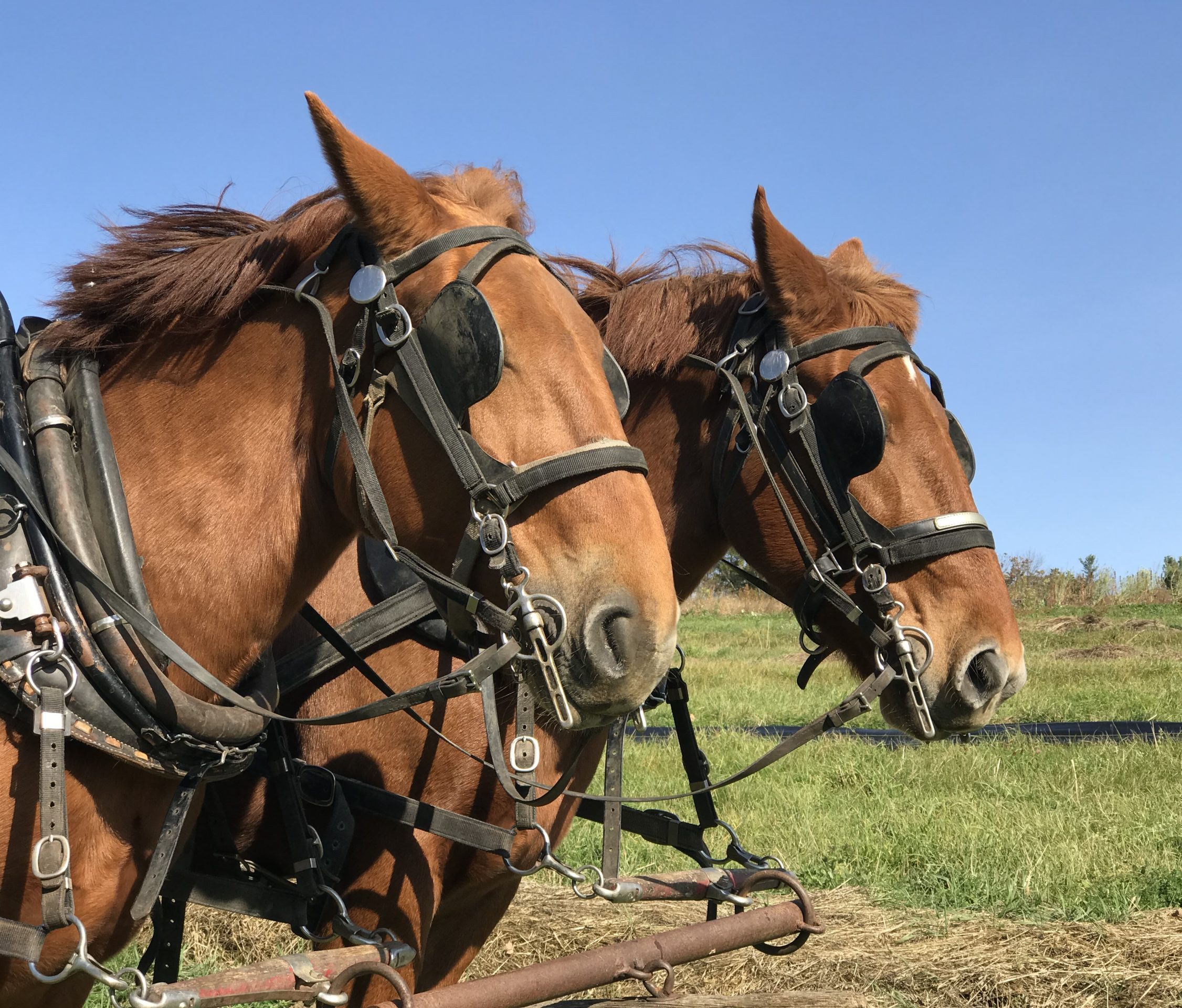 the horses at Sawyer Farm

the sun is the fuel

And there’s the fact that the horses make their own hay up on this field: it gets deposited in the barn over winter – gets turned into compost – and that compost gets spread as a fertility for all the vegetables. The sun is the fuel for the ecosystem in the sense of growing the grass.

Lately I’ve been thinking about minimizing tillage as much as possible. All the stuff we were reading about this kind of farming was from the late 1800s/early 1900s – books from the golden age of agriculture (before the use of fertilizer and chemicals) – about soil science, cover-cropping and nutrient-cycling, using manure – preaching the same kinds of practices that we were rediscovering 100 years later. We were led down that path by working with horses.

In terms of on an environmental and social level – I do think that the best thing you can do is build soils and ecosystems. So what renovating paradise might really look like – broadly – is that soil life and ecosystem life is optimized – and we figure out how to live within that ecosystem – than dominating it or tearing it apart each year just to extract more from it. 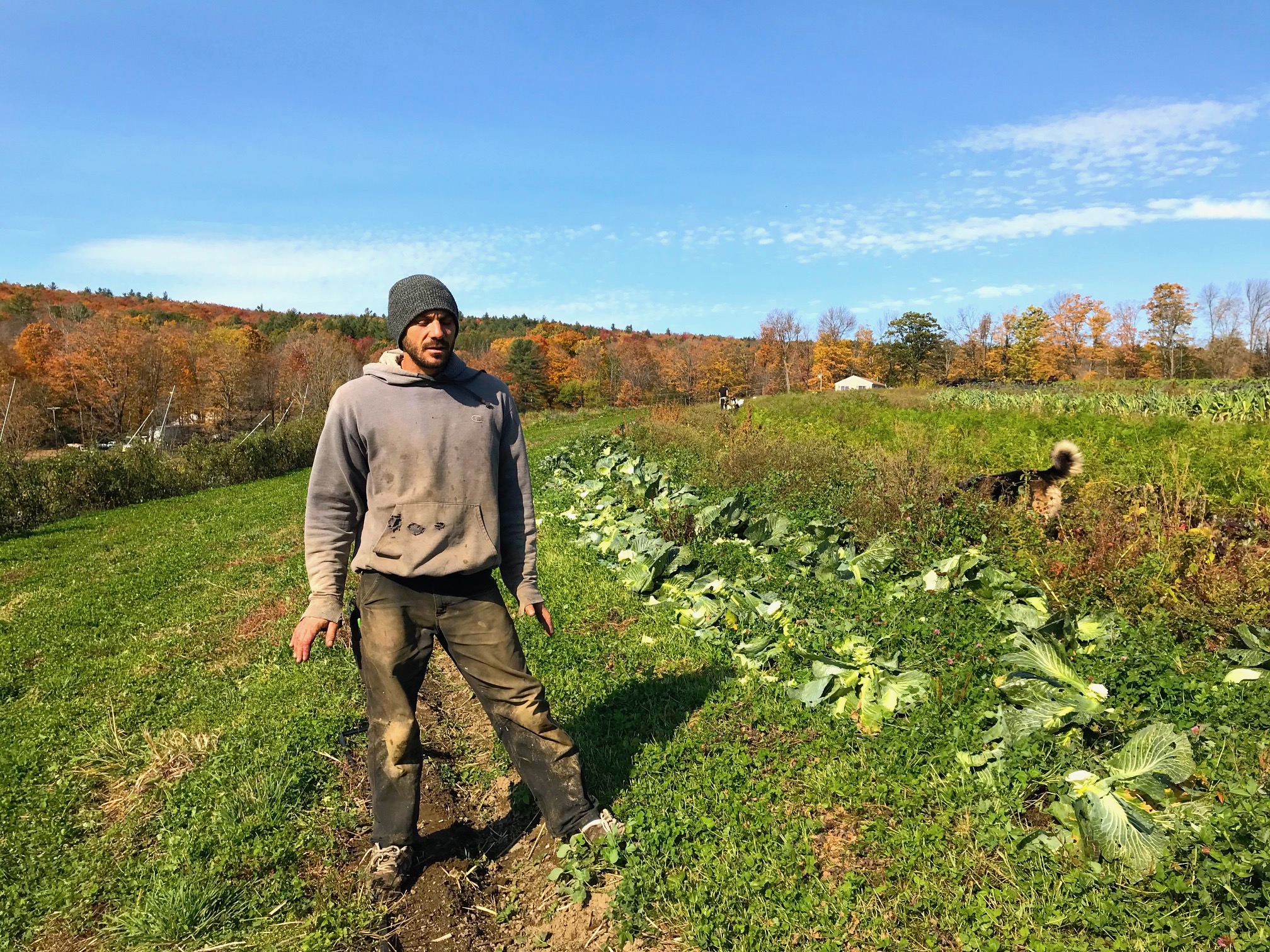 We need a functioning ecosystem that is truly sustainable – and feeds people – and actually continues to become healthier. I don’t want to over-idealize life here on the farm – we still deal with most of the stuff that other people deal with: kids, and a marriage, and money – none of the issues go away. Having said that, I don’t want to do anything else. This is definitely the kind of work and the lifestyle that I want – and what I want going forward. 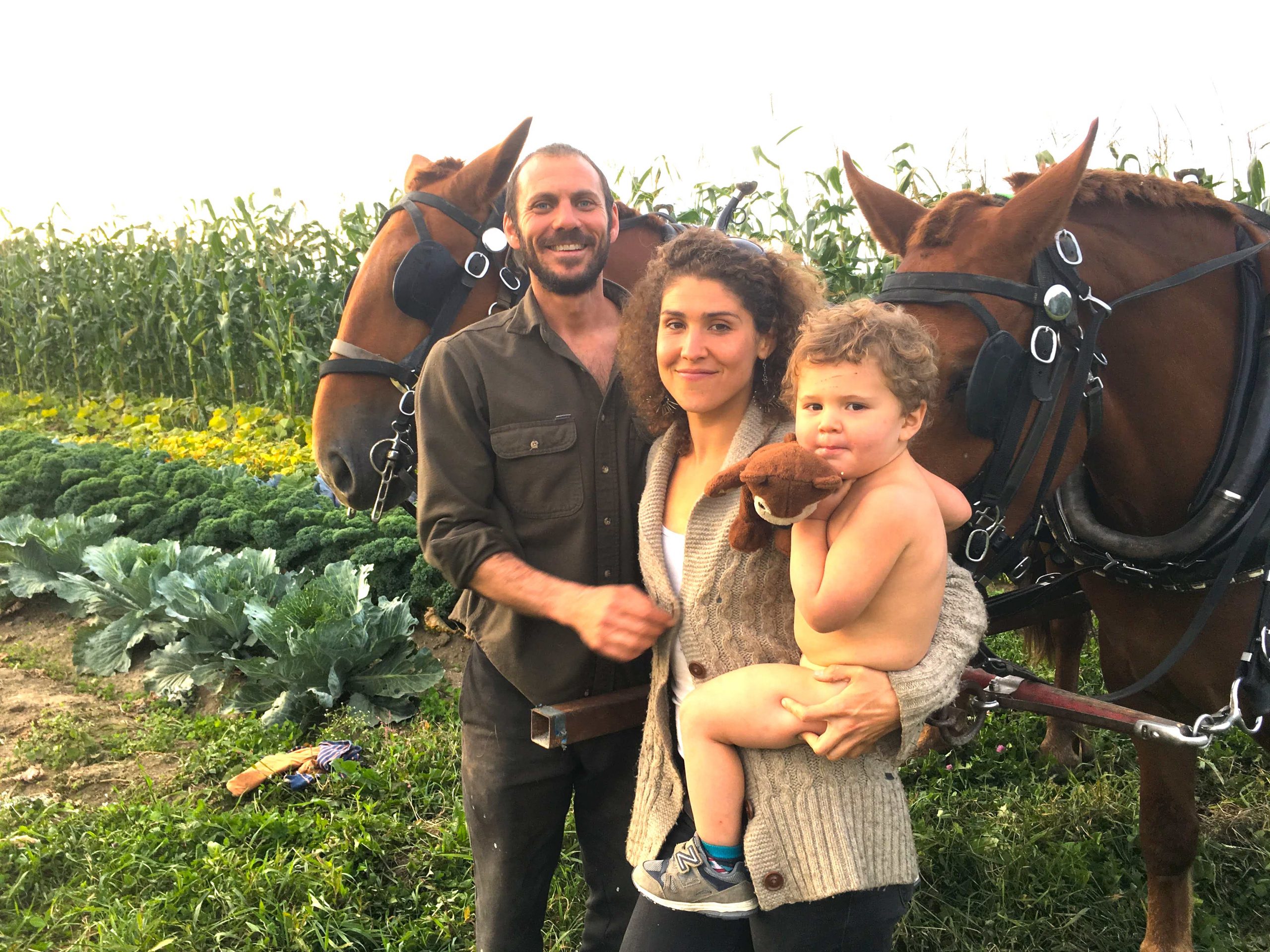