by Laila Salins, with Sandra Zandberga

photos by Laila Salins, except as otherwise marked 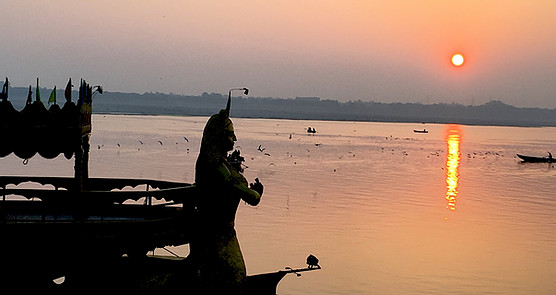 sunrise on the Ganges, Varanasi, India, 2019

For many years my partner and I had been looking at properties over a wide area in Western MA, searching for a home – a somewhat entertaining, but mostly heartbreaking process. There you are: falling in love with a place, realizing it’s beyond your means or ability to fix, and watching yet another one slip away. But we finally found a little fixer-upper that we thought might work out, in the town of West Chesterfield in the Hidden Hills. (The towns here still remain rather hidden, with no highways for miles around – and lots of wilderness and open spaces). 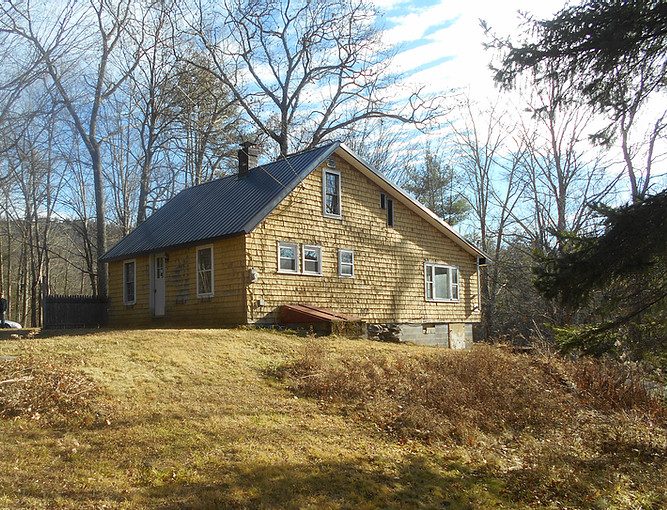 the fixer-upper in W. Chesterfield

it’s gotta be near water

Surprisingly, despite its modest size and unassuming appearance, this house seemed to have most everything we had our heart set on: a great room – large enough to host gatherings and house concerts; space for a music studio; and an intriguing landscape of fields, hills, ancient trees, stone walls and glacial erratics. But most of all, it fulfilled my main requirement: it had to be near a source of water. In this case, the Westfield River (with its imprimatur of being designated wild and scenic) was just outside our west-facing windows, cascading toward the Chesterfield Gorge, where thousands of years ago glacial rivers tunneled through bedrock to create this sheer-walled ravine. We named the house Casita Largo – a nod to the desire to have it be a place where the tempo of life could slow down and leave more time for creative projects. Or for just taking it all in… 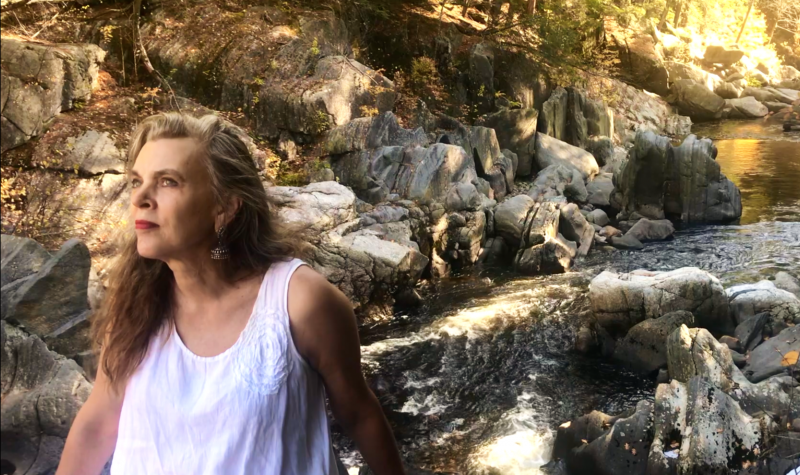 Laila at the Chesterfield Gorge, 2020

We took possession of the space in the dead of winter – and yet our First Look contract with Fannie Mae required us to have the place habitable within 60 days. Ha! This place was a serious mess, dilapidated and sad (locals who had inspected it didn’t find it worth fixing). But somehow we didn’t feel daunted by its appearance. Had we known what lay ahead… Sometimes ignorance is a blessing – or we may have never proceeded. So there we were: with no electricity, no workable plumbing of any kind (neither sink nor toilet), and yet – with ambitious plans for renovating large parts of the interior and exterior. Yeah, just a few minor details.

We settled into a daily pattern of driving out there every day from a relative’s home half an hour away, filled up our coffee cups from a thermos, lit a few candles for light and warmth – and got to work. Not being a carpenter myself, my main (or only) talent was in demolishing! It was oddly satisfying to uncover the older structures behind layers of cracked vinyl tiles, moldy sheetrock and greasy faux wood paneling. On one of those early days, as I was pulling down a musty tile from a dropped ceiling, I looked out the window at the wintry landscape and the river below, turned and said: we are renovating paradise. 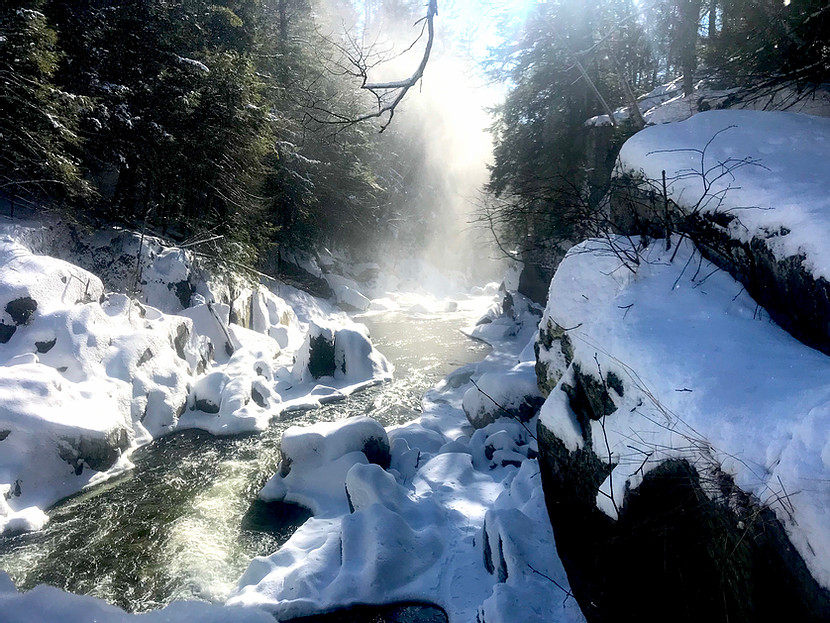 the Chesterfield Gorge, winter of 2020

That phrase – renovating paradise – kept coming back to me – at various times, in different guises. What was it about it that kept tugging at me? I was struck by the incongruity of the idea of renovation within this particular landscape, which seemed so unerringly perfect, just as it was, with no need for further beautification. And as I was pondering this, other resonances to the phrase appeared. After all, don’t we all inhabit a home (body and spirit), which we are told we should accept as perfect? And yet we keep feeling as if there’s something about ourselves that should be different, that needs fixing, that should be made better, more whole, more beautiful.

And this led me to thinking about the original paradise, the Garden – and its first inhabitants – and the business of eating from the apple. Who was this Eve, my ancient predecessor, who dared to defy authority in order to take part in the knowledge of good and evil? The more I thought of her, the more I perceived aspects of her within myself: the rebellion, the defiance, the desire to know and to experience it all, damn the consequences. I wished to get to know Eve better – and to gain more of an understanding of how we women (Eves all!) navigate our way toward attempting to create a meaningful place for ourselves in the world.

(a detail from Hieronymus Bosch’s The Garden of Earthly Delights) 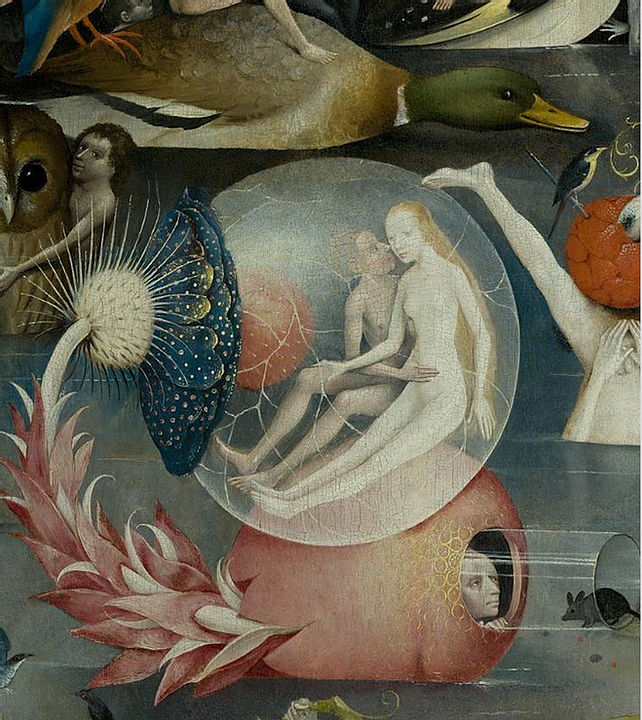 In the fall of 2018 my friend and colleague Sandra Zandberga from Latvia reached out to me to suggest that it was time for us to once again develop a project together. Indeed. Agreed! We submitted a two-pronged proposal to the international arts organization, CEC Artslink, inspired by the concept of renovating paradise, and were delighted to gain their support.

was a planned photo/text exhibition, entitled Tales of Transformation in the Hidden Hills, based on a series of ten interviews with individuals and/or organizations, to be photographed by Gigi Kaeser (of Family Diversity Projects). The subjects chosen for these tales illuminate ways of recovering after a calamity – or of actualizing a unique vision of living sustainably, through community involvement and/or artistic expression. Sandra and I were humbled and startled to discover what a vibrant, creative and supportive community we had stumbled into. Because of Covid-19, the exhibition has now morphed into the Renovating Paradise blog – this is the first post documenting those interviews. 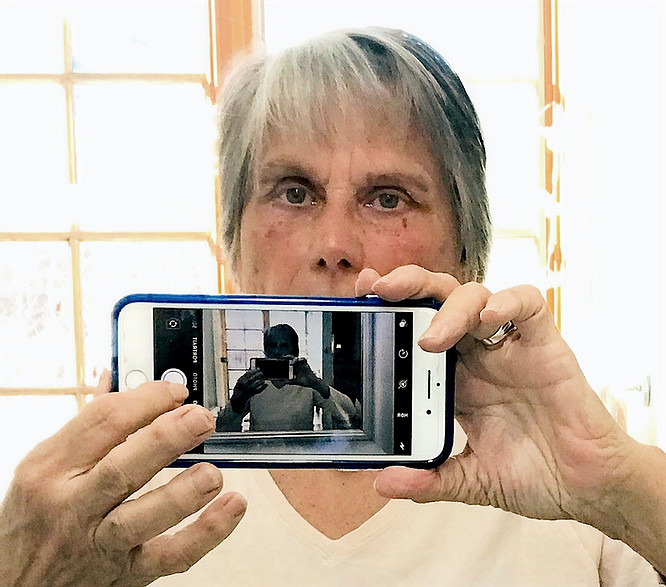 is a multi-media performance piece of my own original songs and stories of renovating paradise (Cascades of Stillness, can be heard at left). Some of the themes covered here are: reflections on Eve and the expulsion from the Garden; the repercussions of domestic violence; and our volatile relationship with Mother Earth. With the threat of Covid-19 now receding, one can once again dream of live performances in the not-too-distant future.

I live in Latvia, but I had worked together with Laila on a number of previous projects. Our most recent one, presented in Latvia in 2018, was a multi-tiered presentation based on the “Hell’s Kitchen” émigré Latvian arts movement of post-WWII New York, of which Laila’s father, the poet Gunars Salins, was one of the leading figures. A subsequent grant from CEC Artslink gave us the opportunity to begin work on a new project: renovating paradise. I flew to NY in August of 2019, to meet with Laila, where we spent a few days exploring cultural events in NYC, including the Gospel & Jazz Vespers concert at Convent Avenue Baptist Church in Harlem (seen below, with Sandra at left). 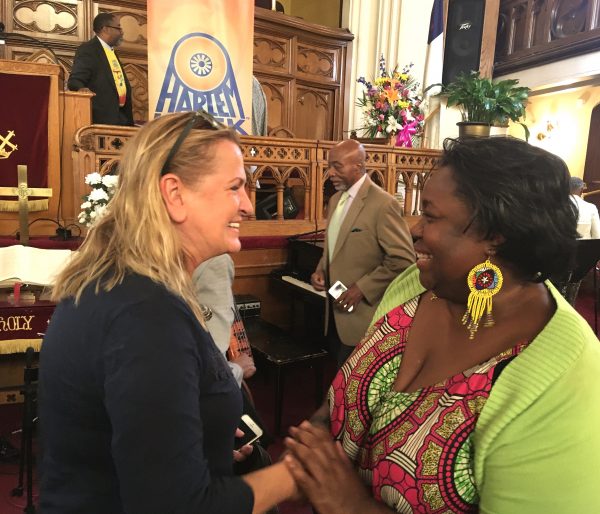 at the Convent Avenue Baptist Church in Harlem, with Sandra at left.

camping out at CLARA’s

We then headed for the Hidden Hills of Western MA, where Laila and her partner share a country home in West Chesterfield. There Laila and I embarked on our renovating paradise project. I spent ten days camping out in the little outdoor sauna, affectionately referred to as CLARA’s (Casita Largo Artist Retreat and Sauna), overlooking the nearby vernal pool. 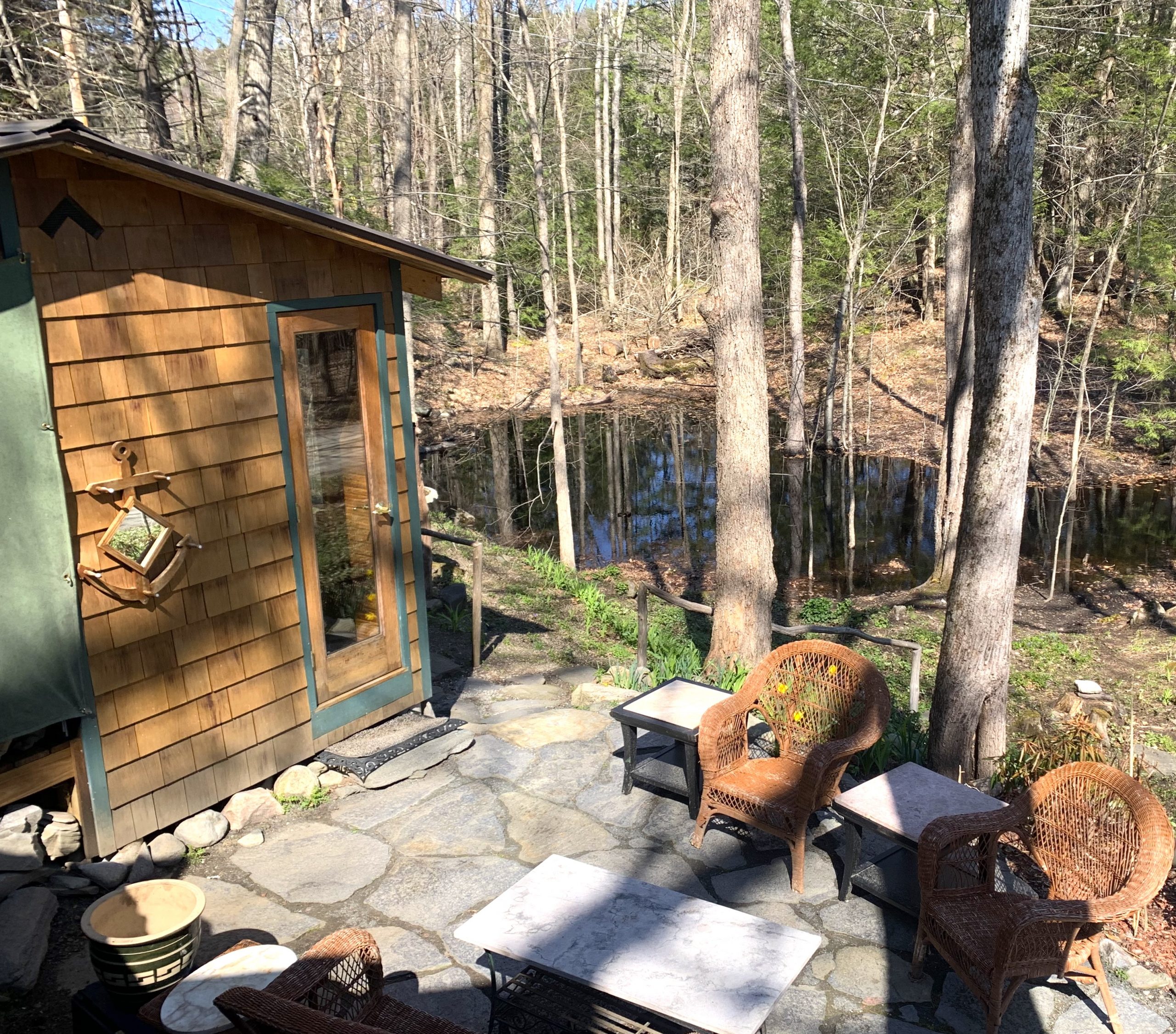 After breakfast we often began the day with a hike in the spectacular Chesterfield Gorge along the Westfield River (basket in hand), where I was happily surprised to be able to gather for dinner many of the same delicious mushrooms that we prize highly in Latvia. Then we would begin the task of organizing meetings with the people and organizations whose work and lives had inspired us to start this project. That was a very intense and emotionally charged period, and these intimate encounters enriched my life with indelible impressions.

The final evening of my journey together with Laila was a small detour to Philadelphia, which culminated in a “pajama party” at the remarkable studio of Sebastienne Mundheim (Latvian/American interdisciplinary storyteller) – and some of her handmade puppets…

pain and joy have one language

The whole experience once again affirmed that the distance between both sides of the ocean is merely geographical – that the fate of people and the arc of their lives is similarly unique – and that pain and joy have one language. Consciously or unconsciously, we are each seeking our inner paradise, and this process of renovating paradise is the deepest realization of this calling. Only by following that calling can we become truly human – as creatures whose lives are devoted to creating beauty, harmony and compassion toward one another here on earth. 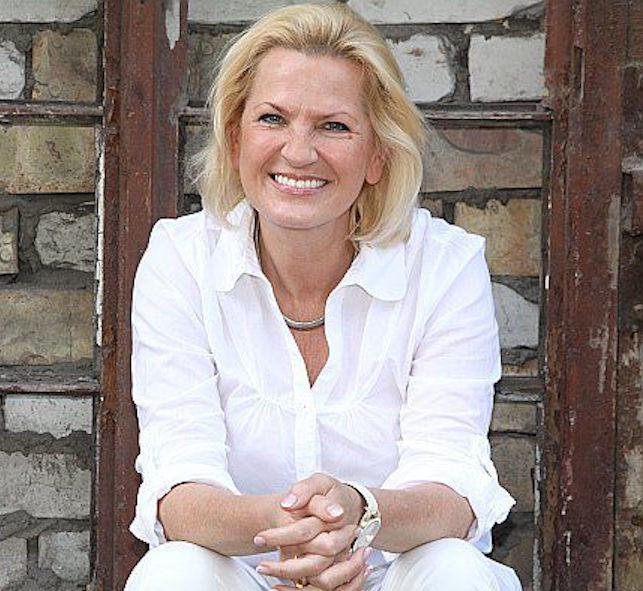 and back to Latvia

It is my wish to continue this project in Latvia, initiating a similar process of interviews with people and institutions here. Ultimately, I hope to create an exhibition highlighting two parallel sets of of photo-text exhibitions of tales of transformation of people and institutions in the U.S. and Latvia at the VEF Cultural Palace in Riga, as Artistic Director of that institution (seen here). I hope that one day this will once again be possible! 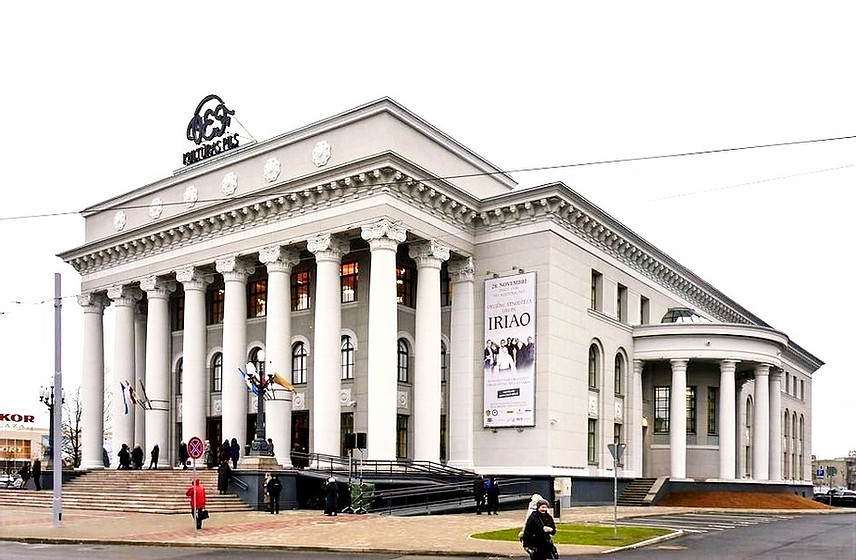 As for Casita Largo… within three months of beginning the renovation, the interior work had been completed by a local contractor: the ceiling of the great room was opened up; the bathroom and kitchen entirely renovated down to the studs; building supports were shored up, etc. We chipped in with the work as best we could: painting the rooms, re-conditioning the wood floors, finding used furniture and appliances, and power-washing the building, eventually painting it a happy trio of colors: turquoise, apricot and lime green. 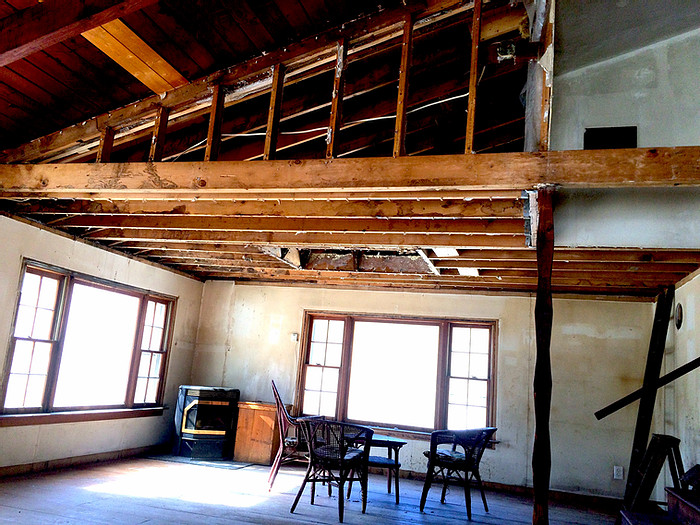 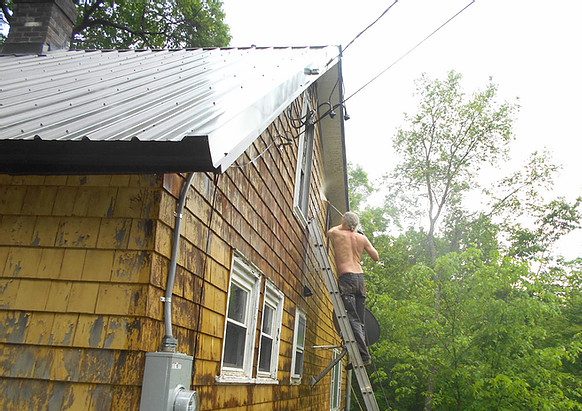 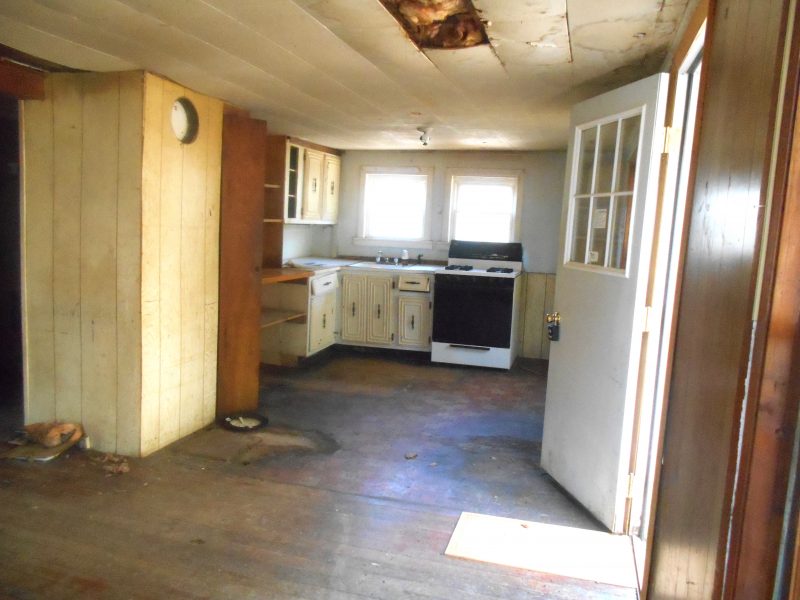 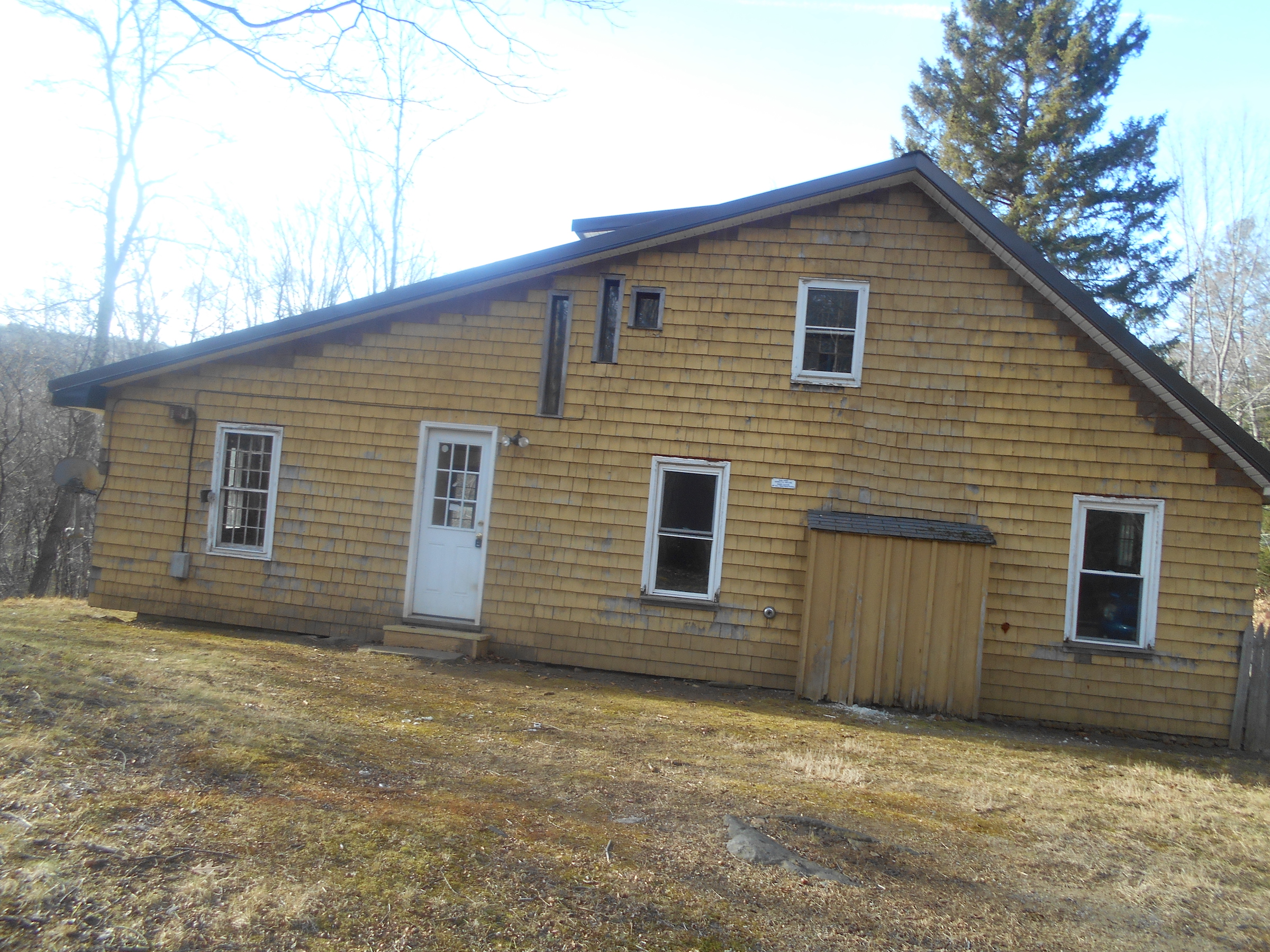 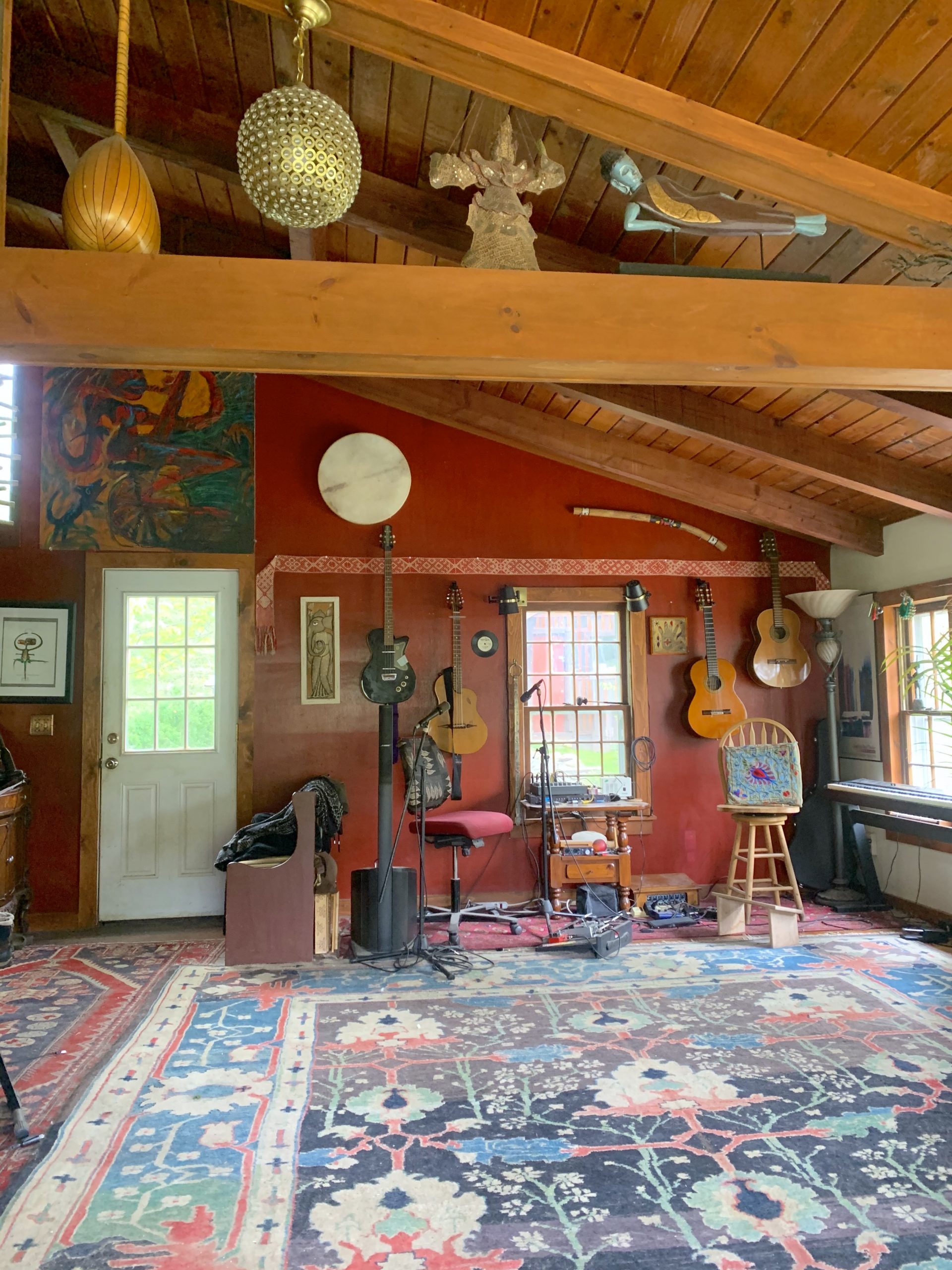 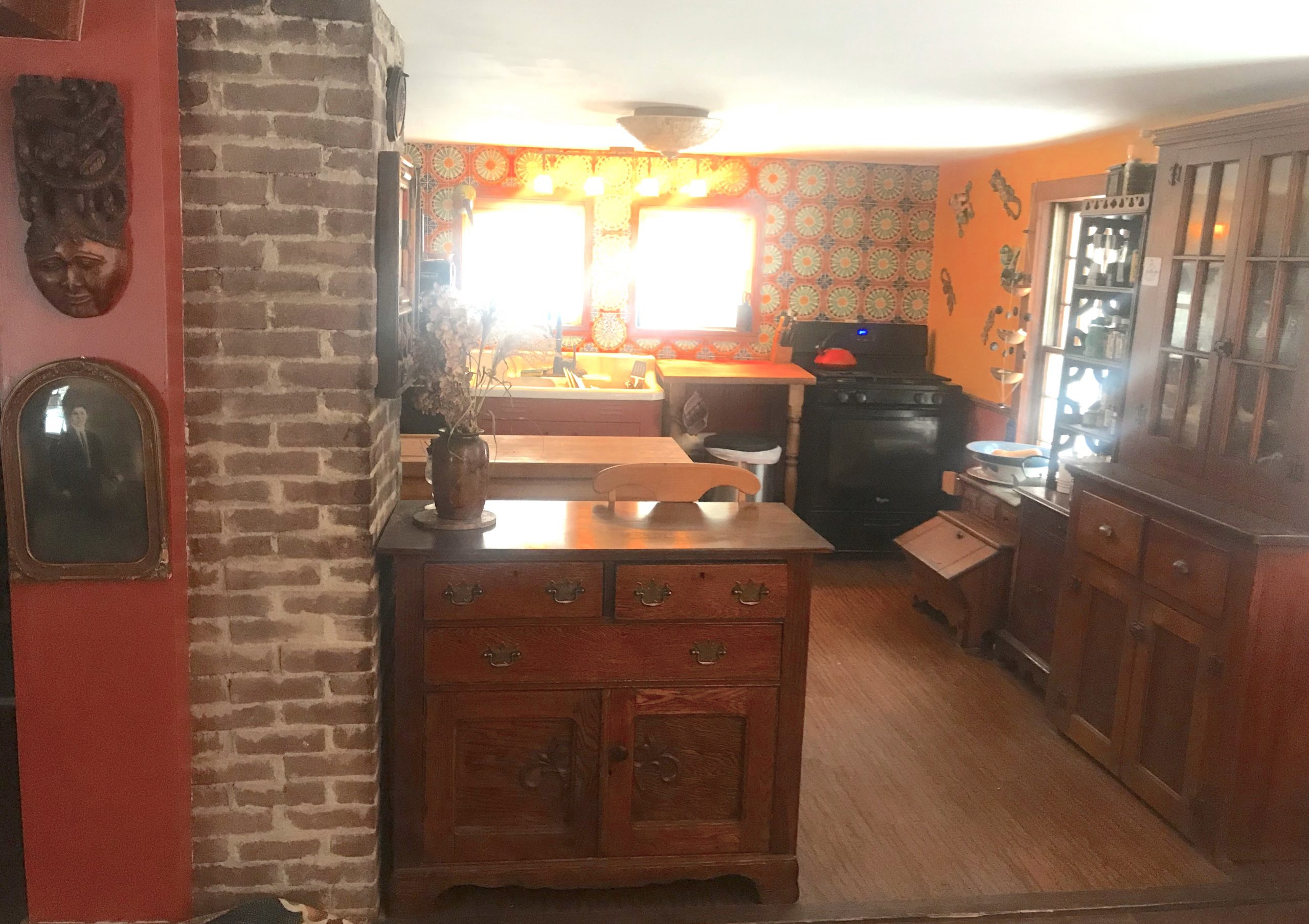 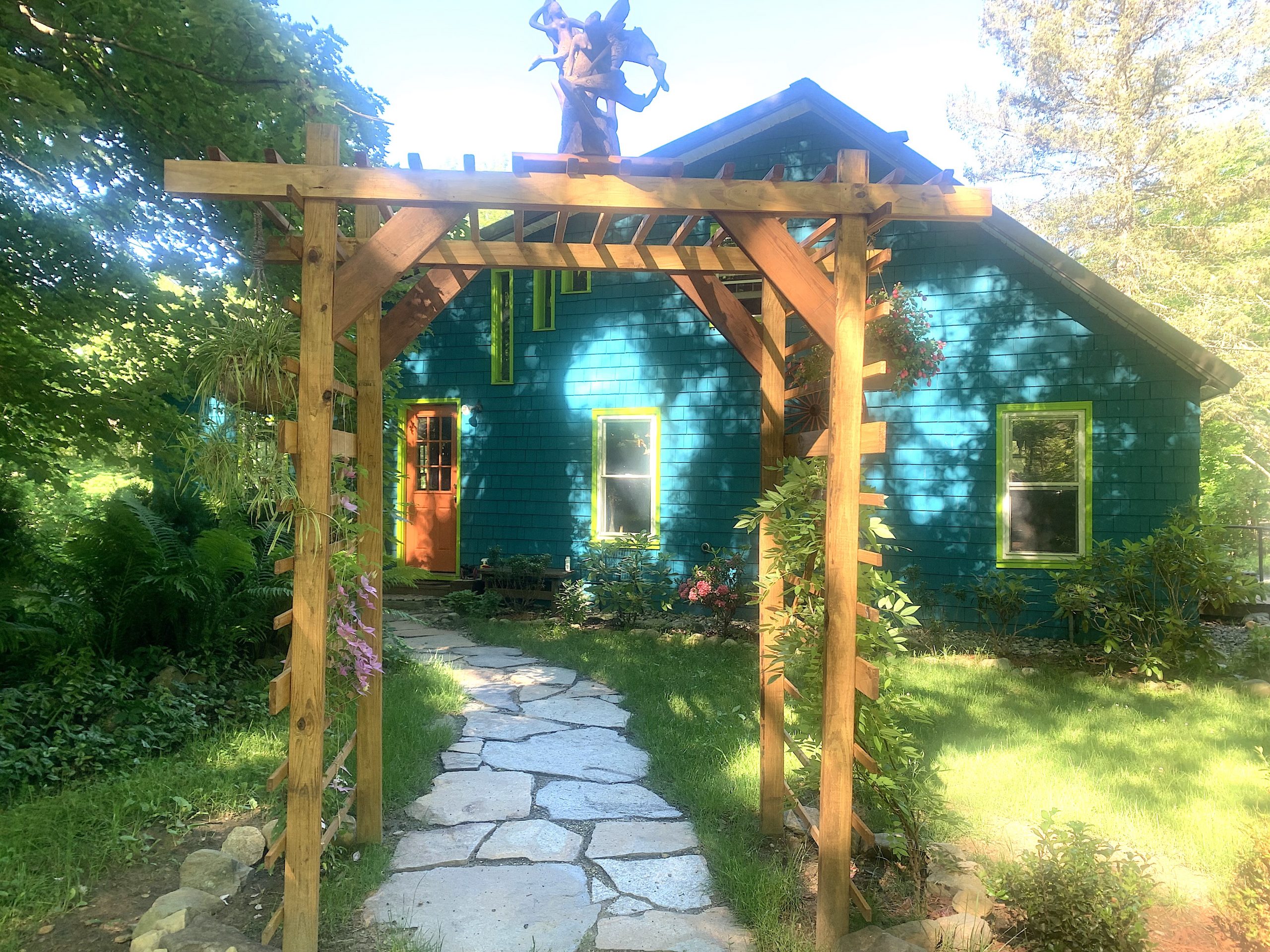 It has been gratifying to have Casita Largo become a place where music is both created and performed. In 2017 the house concert series, Tunes and Tales at Casita Largo, was inaugurated (supported, in part, by the MA Cultural Council). The concept of the series is to encourage local professional musicians to describe their personal and/or creative process as they perform their music, while in a relaxed, intimate setting. The opening concert of that series was with cellist Steven Katz, seen below. 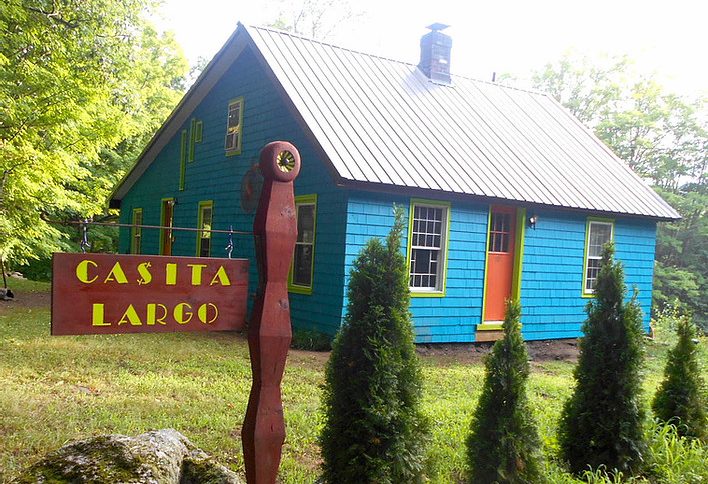 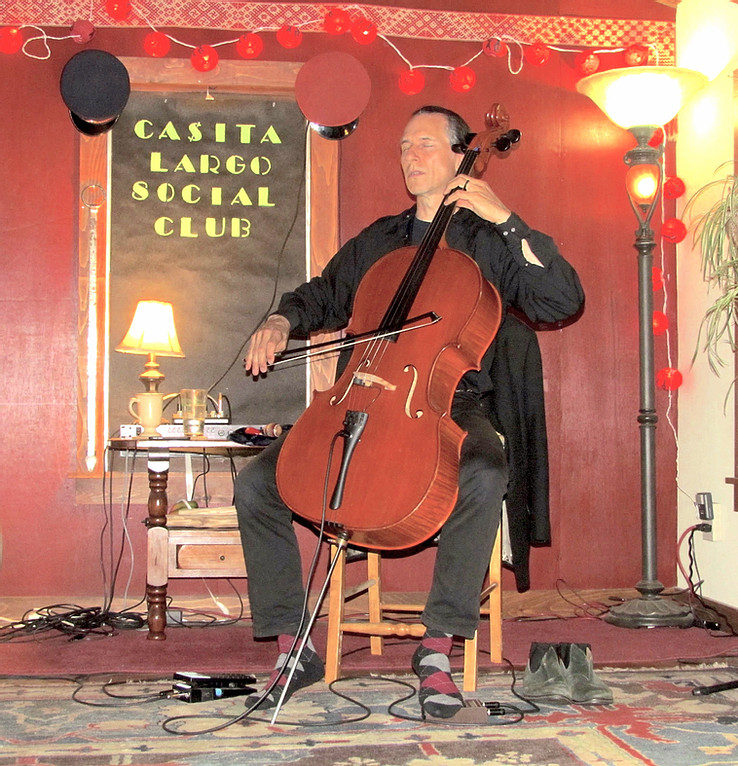 What do you get when you pair a Berklee jazz guitar dropout with a classically trained Latvian folk singer?

And it is here that the music for my duo with Jim Matus (the Matus Salins Marching Band) is written and recorded. Our debut CD, High We Shine the Sky, was just released this spring. The title track can be heard below. The video is by the Latvian artist, Arturs Virtmanis.

In the years that followed there were small additions to Casita Largo: the building of a sauna that also functions as an artist retreat/hideaway; and later – the addition of a balcony overlooking the river. All the while there were new landscaping projects: creating a field-stone terrace; the planting of privacy hedges, fruit trees and vines; and pulling out the plentiful rocks in the ground to erect more and more stone walls, including a multi-level garden terrace built into the hill.

And, as always: more tales to tell – and songs to uncover. The work of renovating paradise continues… 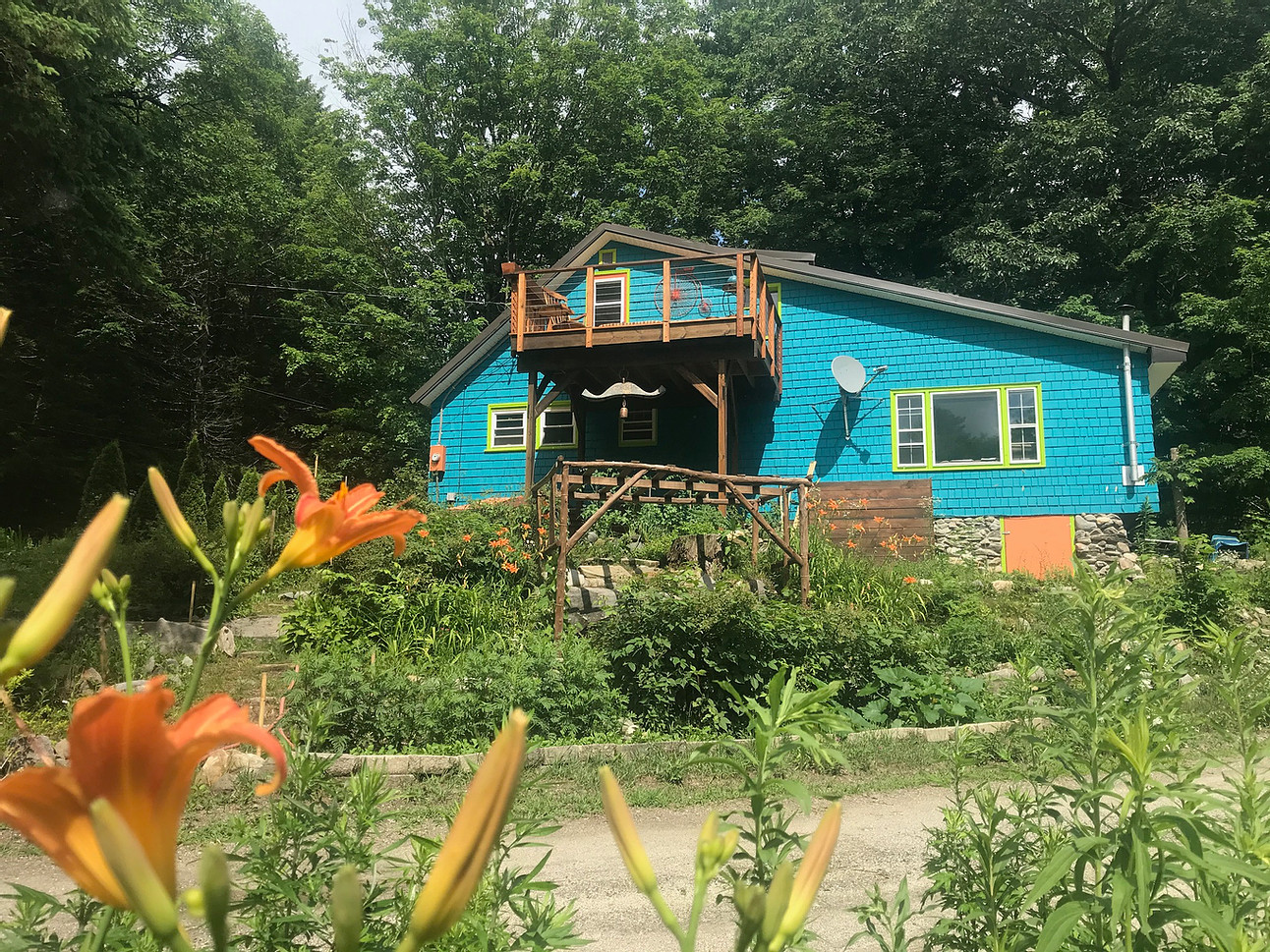