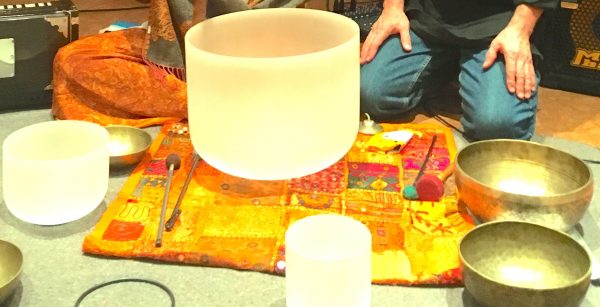 Julian: I swam across the Danube with my brother Florentine to escape Romania. Twice. 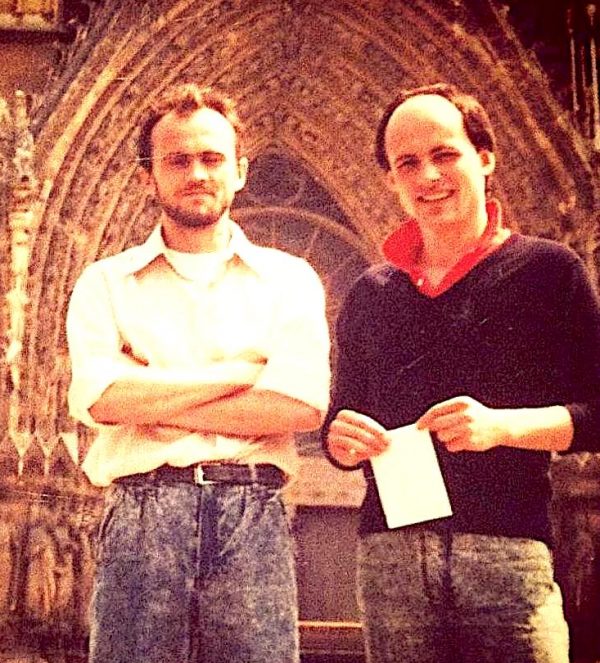 a different kind of freedom

My brother Julian and I grew up in Romania. At the time it was a totalitarian communist state under the rule of Nicolae Ceausescu. Many were being arrested for political reasons, and suffered imprisonment, torture or death.

After getting to know some people from Western Europe, we felt that we had no other choice but to try to escape to freedom, even though we had no idea what was on the other side of the Iron Curtain.

We were in our mid-20s, playing music, performing for tourists – French, Swedish, Germans. They felt so different – much more free, and we wanted to know what it was like to experience that kind of freedom.

We fulfilled our plan to swim all the way across the Danube to Serbia (about a mile wide at our point of entry) – and ask for asylum there. But for unknown reasons, we were sent back to Romania – and were sentenced to one year in prison. There were about 80 of us crammed together in one space: teachers, doctors, intelligentsia, many of whom had also tried to escape.

It turns out that LIFE had sent us exactly where we needed to be to learn what was necessary for the journey ahead. The next time we swam across we knew to trust no one… We travelled through the forest at night and managed to get to Italy – and eventually to the U.S. 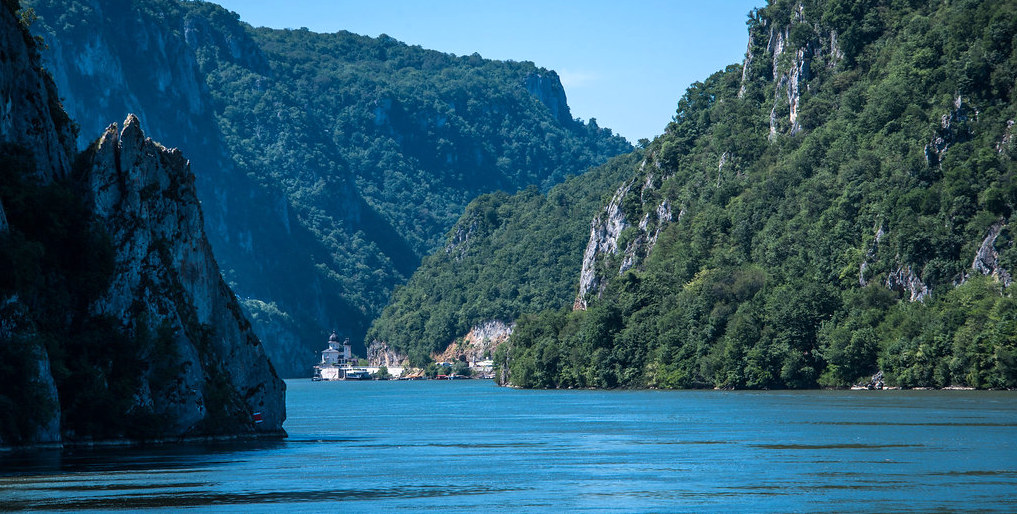 Danube River between Romania and Serbia (photo by Peter McGrath)

When I was still living in Newington, CT, my friend Ramona kept telling me: you have to meet our friend Julian – he has a lot of the same interests as you do. When we finally did meet, it was springtime, and Julian and I went looking for a field to gather wild plants, just like my dad from Italy would do, seeking wild mushrooms, dandelions and burdock.

And it was my father who told me, Joa, whatever you do in life, keep singing! And that has been one of the main threads that has kept me going – and has created a strong bond between me and Julian.

(at right, Joa as a teenager with her dad, family photo)

Julian and I began our journey together as a leap of faith. We knew what we didn’t want – and now we were trying to find a way to actualize what we did want: a different way of life, a sense of simplicity, land to grow our own food, space and time to develop our music. 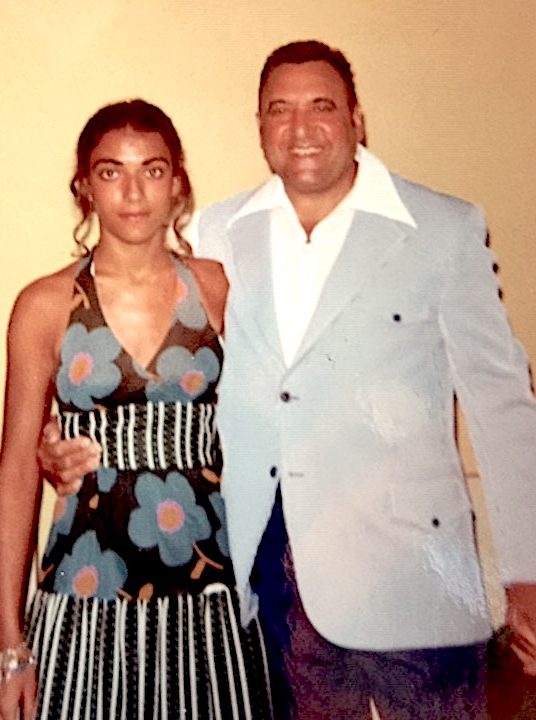 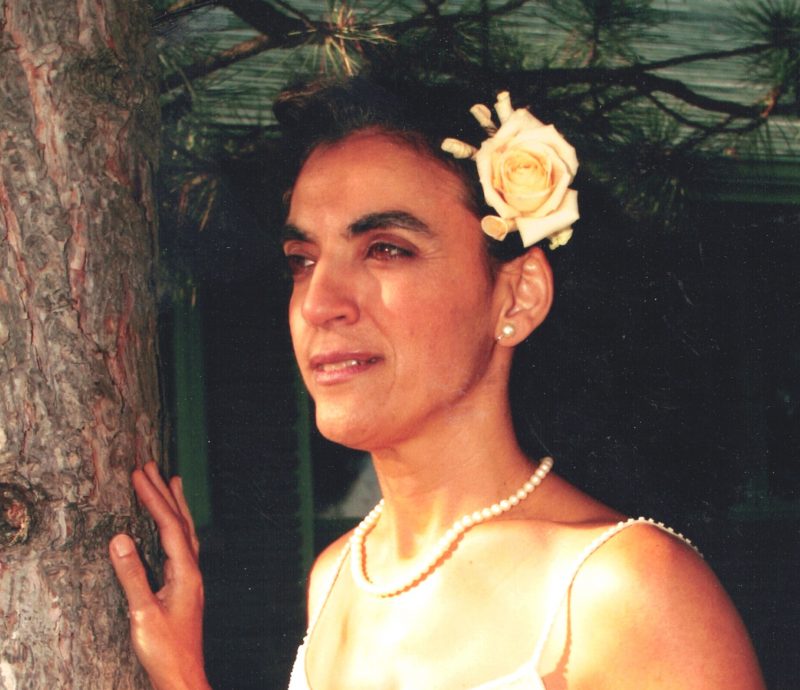 Julian: The city began to feel like another kind of jail– surrounded by walls on all sides. We wanted to trust a more primal instinct and a connection to Nature as Mother.

Joa breathes that understanding through her whole being, her Italian gypsy roots: la strega– the good witch!

Meeting Joa was the luckiest thing in my life. With her I could combine my sound world and weave it into my daily life – to keep singing outside the shower! 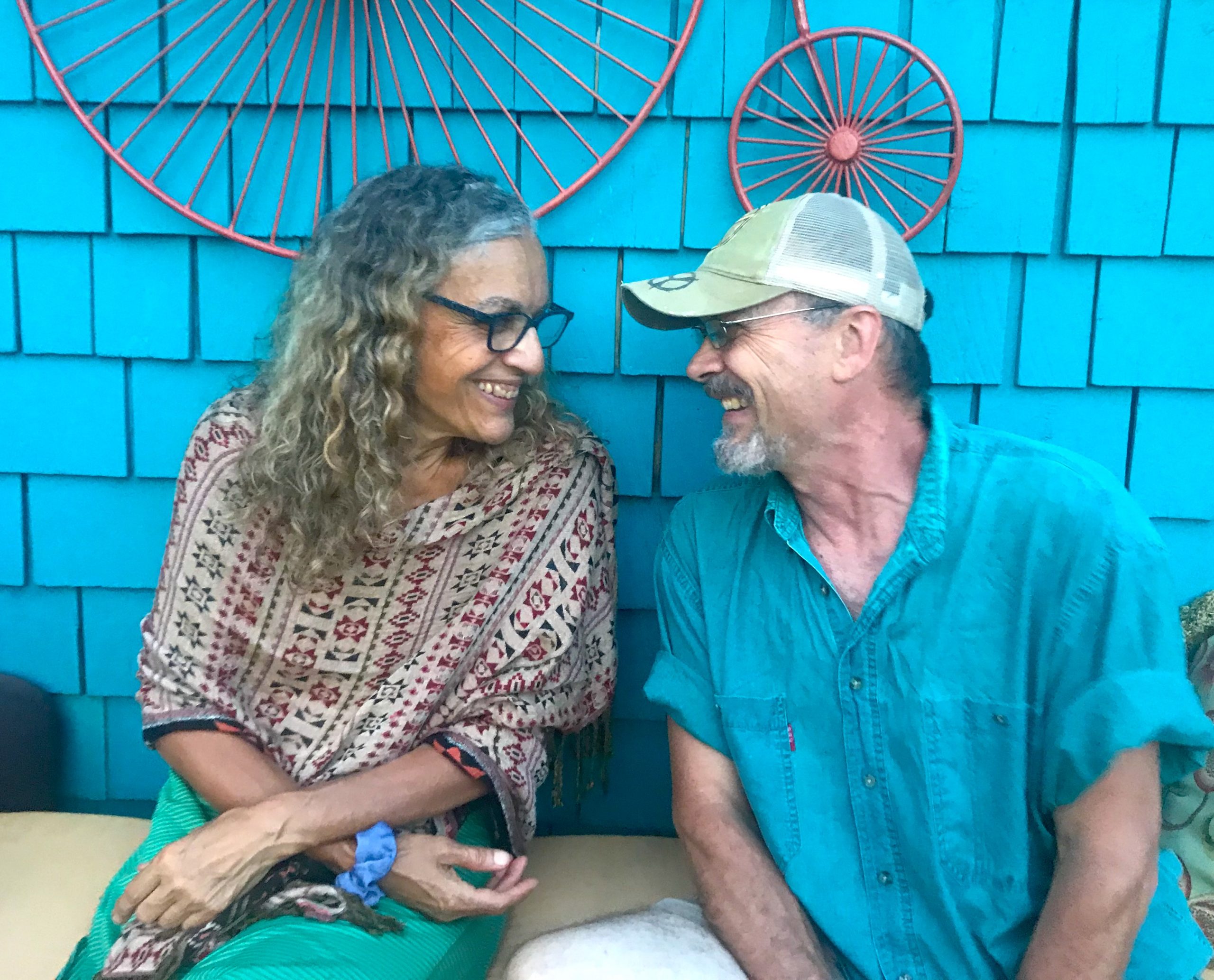 Joa: We looked at a house we liked in Worthington with 15 acres of land. But when the realtor left, we realized that we needed to experience how the place sounds. So we snuck in through the basement window with one of our crystal bowls and filled the space with vibrations. After that we knew: this place is ours.

The first night there I told Julian: I finally know what silence is. I had grown up in a large family, never having a room of my own, near Niagara Falls – noisy and densely populated. So it was beautiful just to hear the silence and the animals – owls and coyotes – and the peepers – we love the peepers! – listening as they slowly build up to a crescendo. The sense of nature here, the seclusion and the quiet allowed this home to become a place of healing. The Worthington home continues to be a sanctuary for those looking to be healed, through ayurvedic healing practices which are cultivated there. 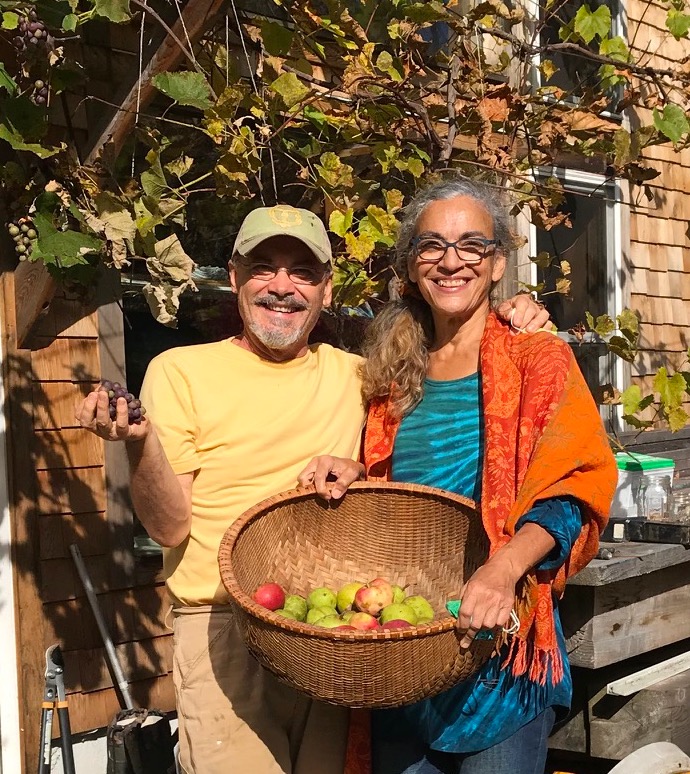 Julian and Joa at Earth Song Farm, fall of 2019

the playground – on the other side of the river

Julian: We later purchased a small house near the center of town in Chesterfield, which we named Earth Song Farm. This property was just a few miles away from Worthington, on the other side of the Westfield River. The expansion of this building comes out of my vision of combining two things: a house for plants – and a house for humans.

We now have a year-round greenhouse that functions hand-in-hand with our sound world and a specific physical aesthetic. This place is a dance between me and Joa – but it’s also a playground in which I can develop all kinds of ideas and feel the freedom to expand who I can be.

(the greenhouse wall of Earth Song Farm seen below, along with Joa and Julian) 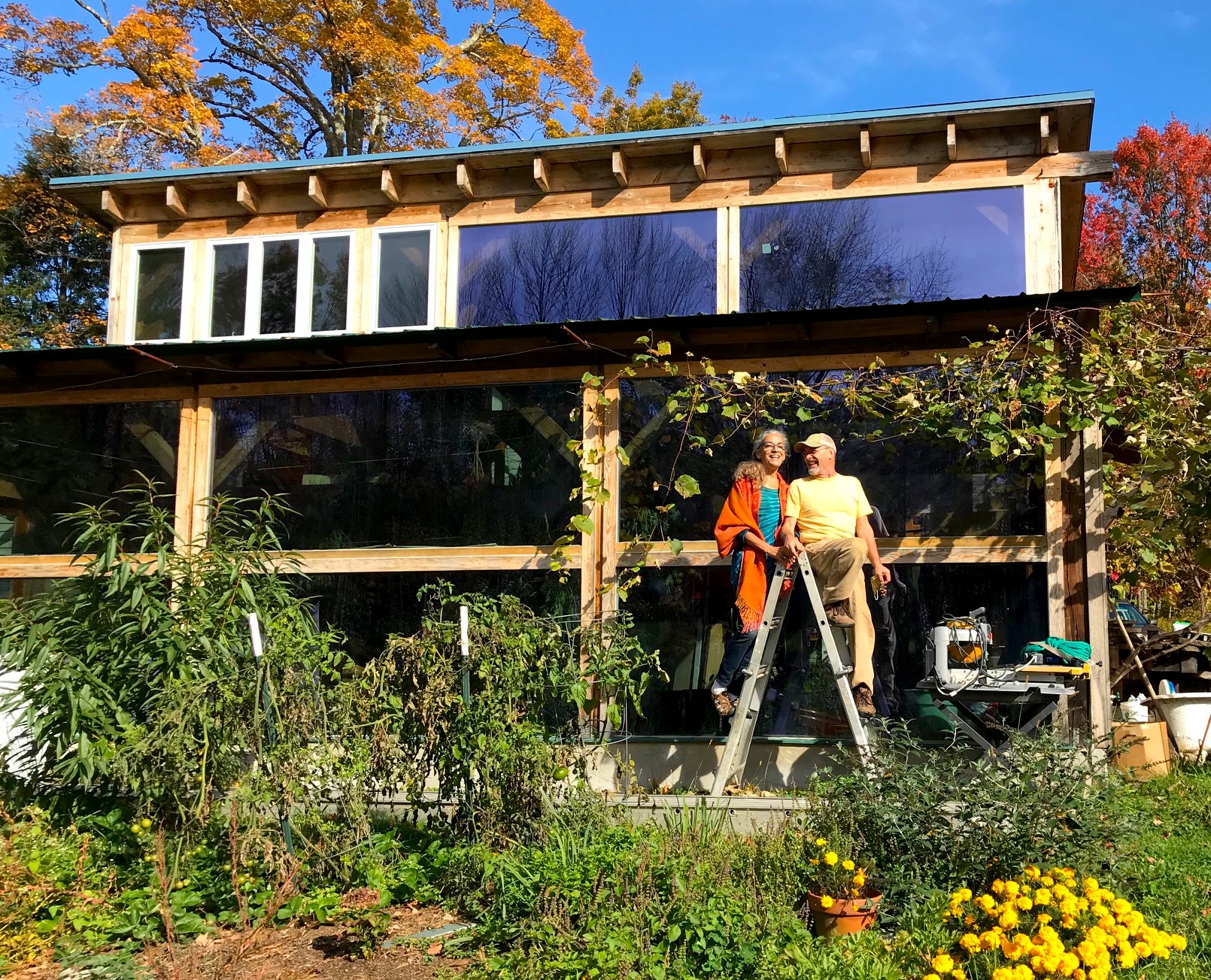 Julian: My basic concept for a homestead is building around the sun, utilizing the maximum benefit of what is given to us freely: passive solar combined with the high-thermal-mass of the earth floor. To achieve this I built a masonry heater at Earth Song Farm, to be the central source of heat. Even on the coldest winter days, once I get it going in the morning it keeps the entire home warm throughout the day (seen below). 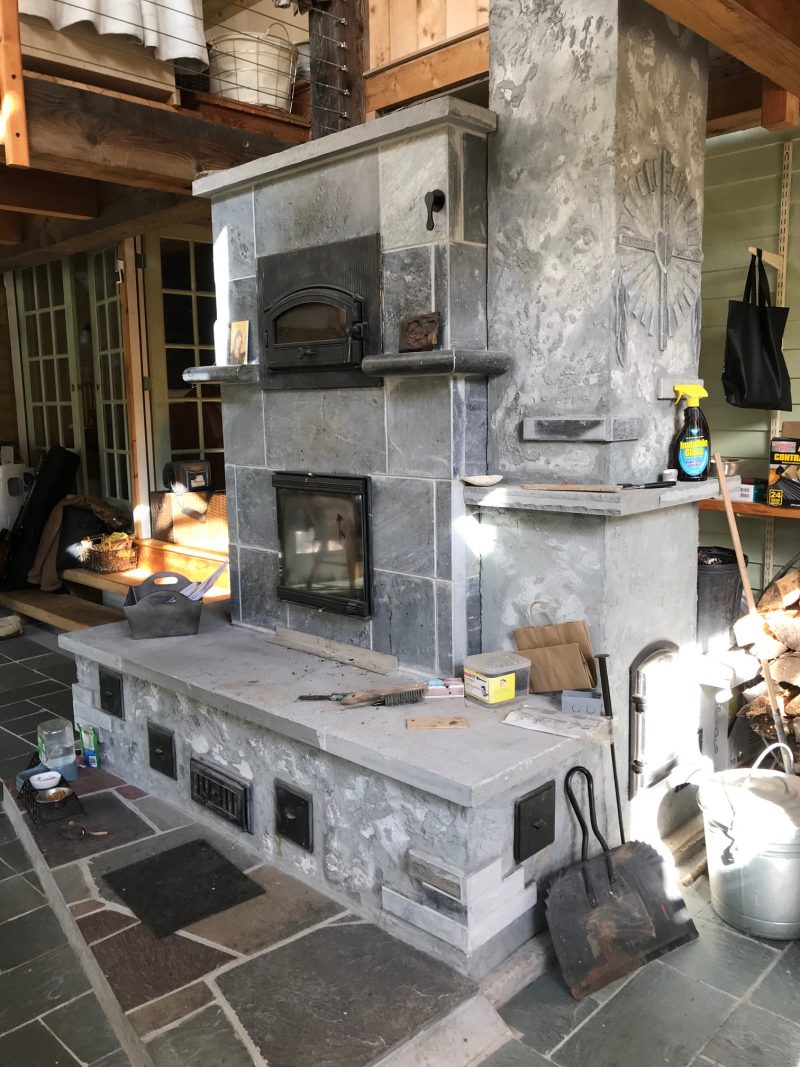 And the plants inside keep growing throughout the winter… 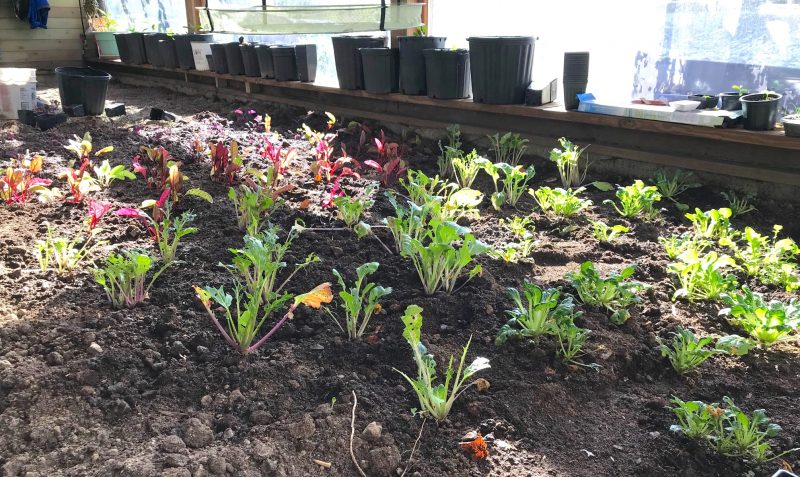 Joa: Now that we’re in our 60s we’re trying to imagine how to simplify as much as we can and do more of what gives us joy: music and our sound healing work. I find myself craving more solitude, more creativity, more time. I want to get closer to the sense of knowing God, of following my dharma.

In our sound healing work we use our voices, guitar, crystal and Tibetan singing bowls, chimes, drums and other instruments to invoke sacred space. When Julian and I do this work together – there’s an energy that takes over that’s so beyond ME. There are moments when we’re just channeling Spirit – moments of grace.