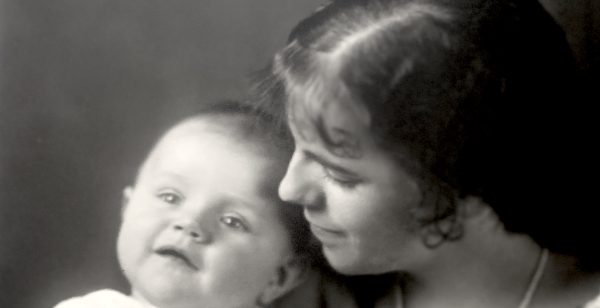 You are my miracle patient, said my oncologist, Dr. Ali. He’s such a handsome, wonderful man! He’s been telling me that for a while now…

I was born in Northampton, MA in 1929, so I’m 92 years old now. (At that time my father, Jesse A.G. Andre, was mayor of the town.) In 2015, at the age of 86, I thought I was dying – it turns out I had Non Hodgkin’s T-cell lymphoma. It took the doctors a long time to get the right diagnosis. And after three chemo treatments I came down with pneumonia. That’s when I said to the doctor at Care One (the rehab center): That’s it – we’re done. We’re done with chemo – we’re done with all of it! I’m dying – just leave me alone. 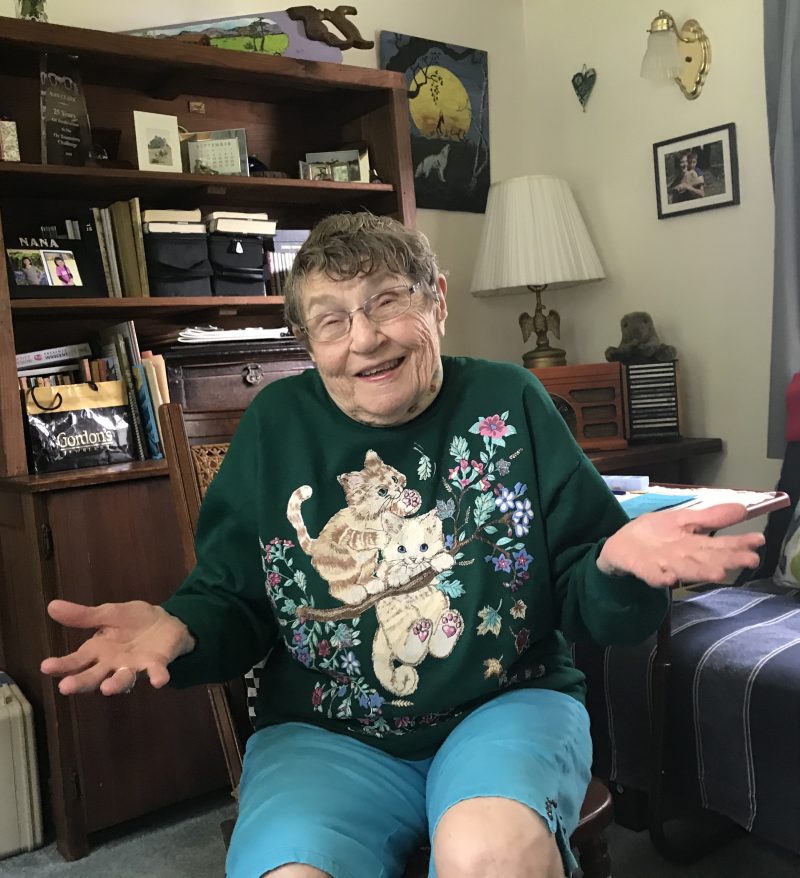 The Angel of Death

I wanted to die. I saw the Angel of Death, and she actually came and sat on my bed – and, oh my, she was so beautiful – dressed in a gossamer gown, with long blonde hair – I can see her now – but I couldn’t touch her. I told her, I’m ok with this, my kids are ok with this. One day my son and my daughter-in-law came to visit me, one of my three grandsons was there, and all my three kids were there, and Vera and Jack from church, playing his guitar — funny songs that we all grew up singing around the campfire. That’s when I told them all: Can you see her? – she’s right there! And they just kept singing and smiling.

(at left, Nan in her home in Chesterfield)

your body’s not ready to go

Anyway, eventually they all left and the doctor came in and said, I hear that you’re dying. By this time I had said good-bye to everyone. One of the doctors at Care One said: I know that your spirit is ready, your heart is ready, your mind is ready, but your body’s not ready. You’ve taken good care of your body over the years and it’s not ready to go. So I asked my daughter who’s a nurse: If my body’s not ready, what can I do? And she said, well, you can stop eating. Oh, ok! So for two days I didn’t eat anything – I just drank water. I simply lay there – dying, dying. That night I saw members of my family who had died: my mother and father; my older sister, my grandmother. I was walking toward them and they were standing and acknowledging me, and my mother’s mother waved at me. And then my older sister who had died many years ago – I saw her. They all recognized me and acknowledged me, but didn’t speak to me – nobody beckoned me. 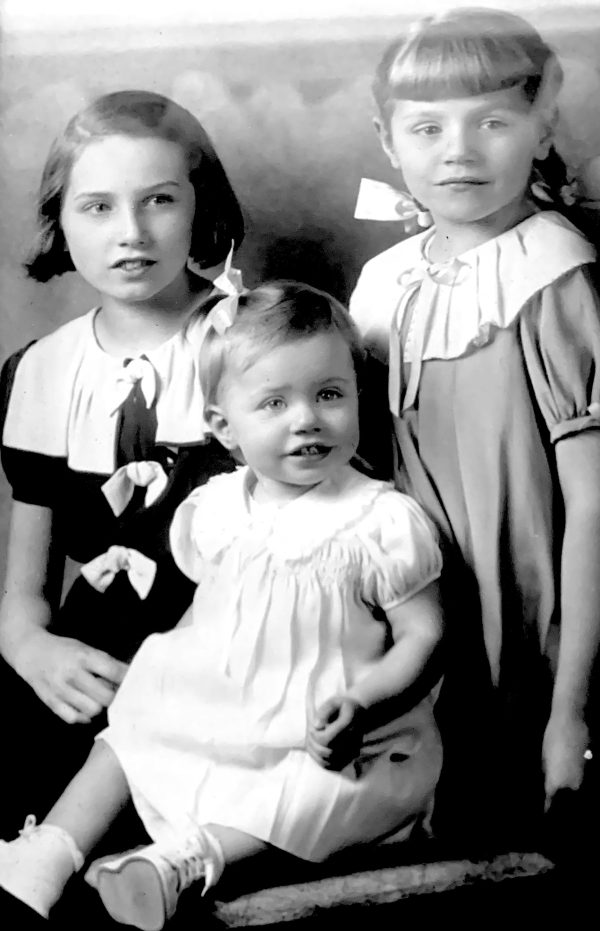 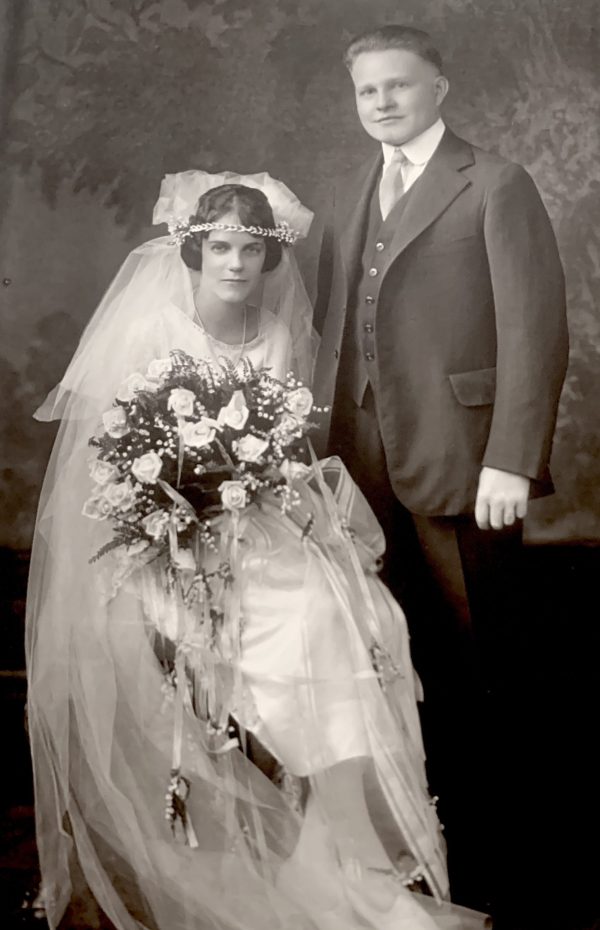 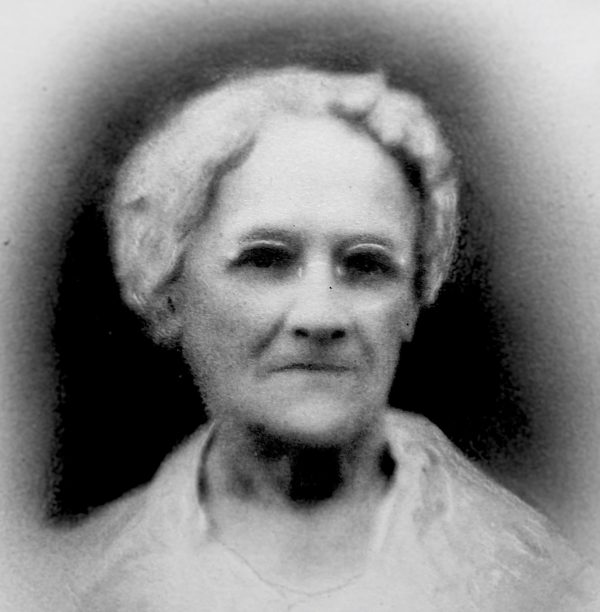 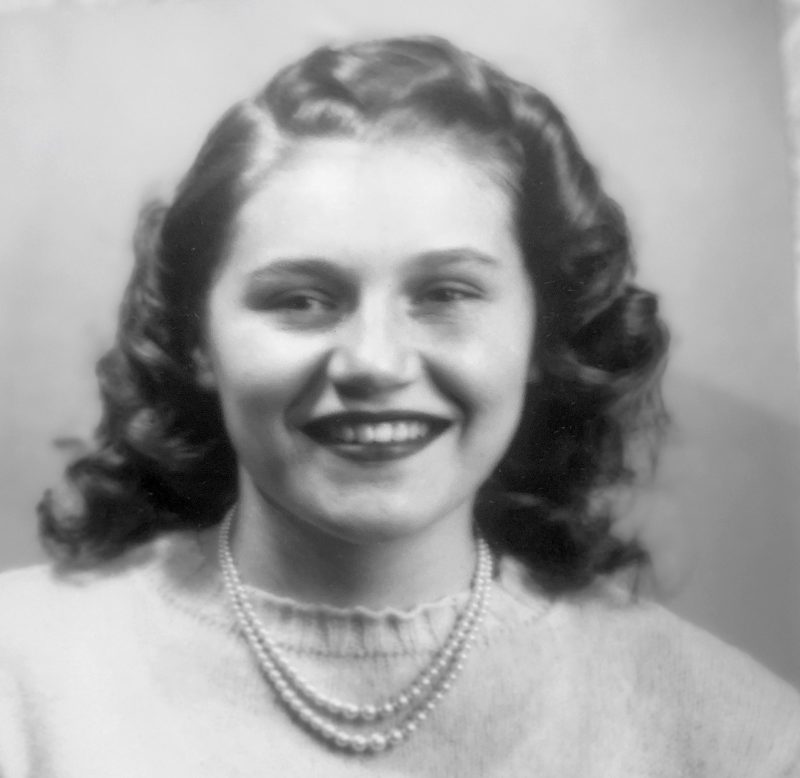 Nan at her college graduation (photos from Nan’s family archives)

I just had to eat!

The next morning I woke up and I was SO hungry. I ate everything on the plate – and I asked for more! I had no control over it. Man, I just had to eat! – and I wondered why there wasn’t more cereal, more toast – and they got more. And then I came back to my home here in Chesterfield and I was provided with hospice care. But the hospice care people weren’t here all the time, so people from church came and stayed with me.

The last time I went to see Dr. Ali was in March of 2019. He works at BayState Medical Hospital in Springfield, where my daughter had been driving me to appointments, a good 40-minute drive one-way. After the last appointment he said: well, I think the truth is that it’s costing you money to keep coming here – all that mileage – I can’t really have you keep coming back because there’s nothing wrong with you.

with a little help from my friends…

If I try to understand how I became healthy, I think it is a combination of chemo (though I only received half of the treatments) – and prayer. All these people – my birth family and my church family – were praying for me to get well, whereas I was thinking that they were praying for my passage – and that includes Steve, my minister. It just wasn’t my time. I believe there’s some kind of power that’s holding us all together. I’m 92 years old and I still don’t understand these things.

at right: Nan (with scarf) at the West Cummington Church, between Penny Schultz and Will Hastings (photo by Laila) 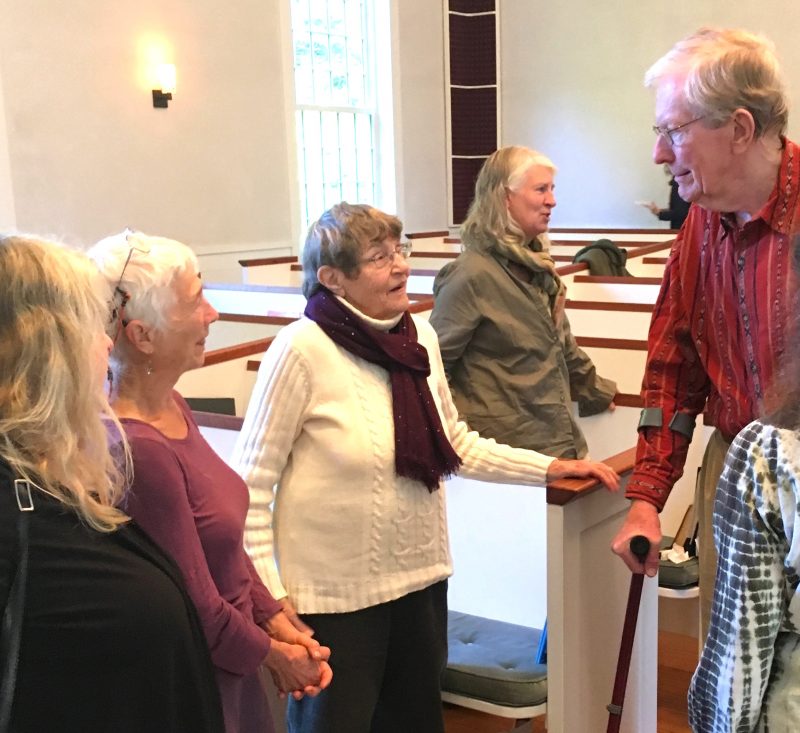 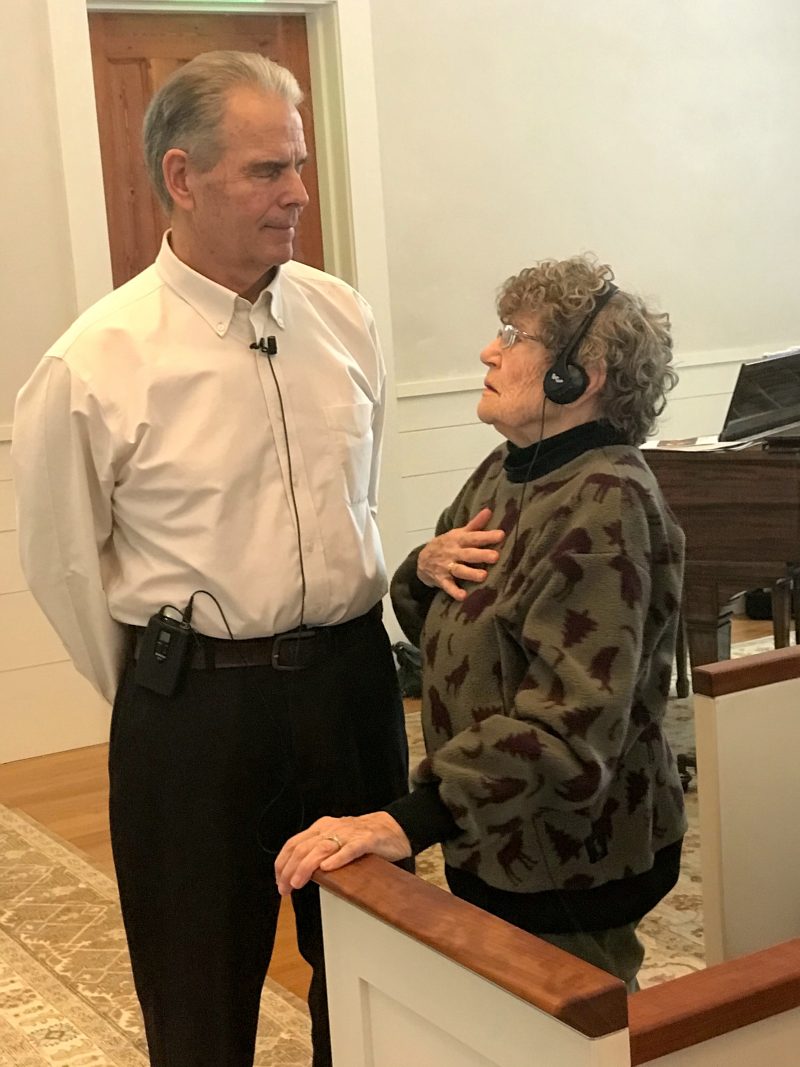 Stephen Philbrick, the minister of the West Cummington Church, with Nan

the beauty of this life

I’ve been afraid of spiders all my life – the tiniest little spider – but I’ve never been afraid of dying. Maybe it’s because I grew up in a Methodist family, in a Methodist church, and I always believed from the get-go that there was this communion of saints. It was in songs, it was in prayers – my parents believed it, and I believed it. I’ve never had a reason to be afraid of dying. Because I know I’m going to see my family again – my mother, father, sister – I’ll be reconnected with them.

But here’s one thing that happened to me, and maybe it was fear… I was on my way to church on Fairgrounds Road – and you know how beautiful that road is – with all the branches. That’s a wonderful part of my life – going to church. One Sunday – some time last year – the sun was filtering through the leaves – and all of a sudden I started crying, because I felt, I don’t want to leave this. I had never felt that way about my life – or my family – but this was nature. By the time I got to church, I was a mess. I told Stephen how I didn’t want to leave the beauty of this life and he said, I don’t think you’re gonna leave it THIS morning. He kind of cracked me up a little and got me out of my sadness. He’s good at that.

brighten the corner where you are

There is one thing – at my age – that I can say: we are responsible for creating peace in our own little community, in our neighborhood. There was a song in our church: “Brighten the corner where you are.” If everybody brightened his or her corner, then we would have peace. I do believe that you can create your own peace. That’s what I’ve tried to do.

Nan currently lives in Chesterfield with her two cats, Spice Girl and Sugar Babe. Nan has raised three children, Scott, Roxane, and Heather, and now has three grandsons, Jesse, Ellis, and Tucker, and two great granddaughters, Layla and Arya. Nan has self-published various books, including “The Brothers Carry-A-Mouse-Off,” a children’s book based on the real-life antics of the family’s four felines (that she co-wrote with her daughter Roxane Wright); “Harker’s Hard Hat,” the story of the moving of the Colrain covered bridge, done with ox teams, as well as the life stories of two elderly members of the West Cummington Church, Ruby Tirrell, and Gladys Brown. Nan is also a regular contributor to the Small Farmer’s Journal.

Below, Nan singing “October Song” (recorded by Laila in October, 2020) 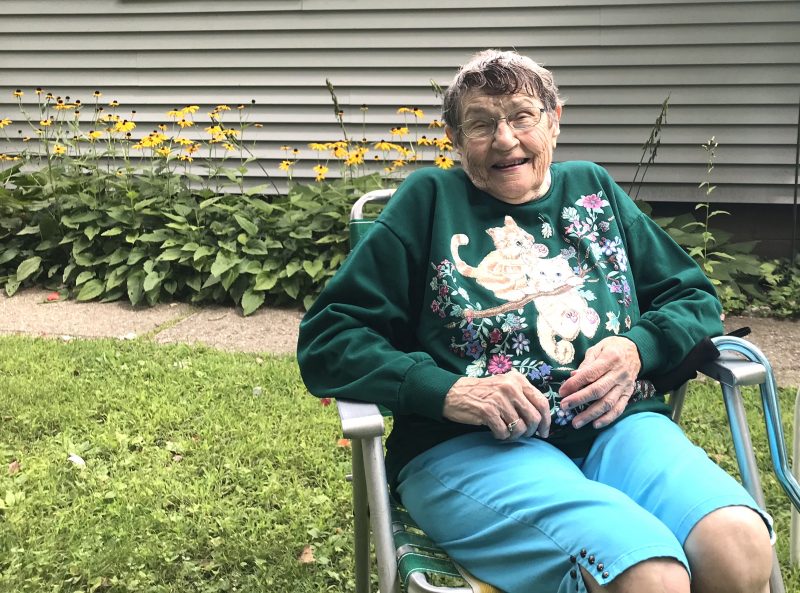 Nan outside her home