The Other Side of Eden – Andrew DeVries 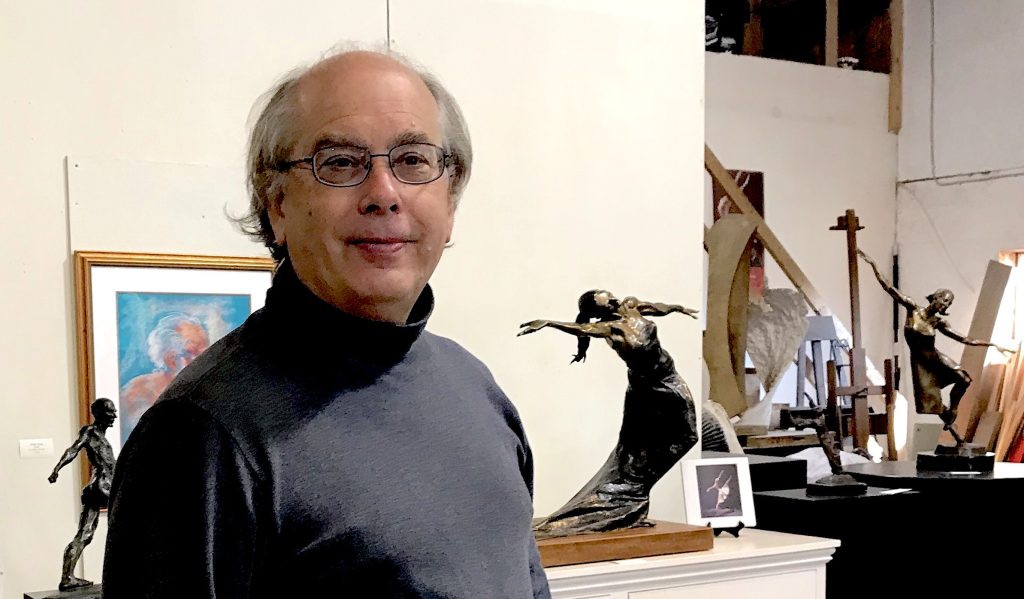 a series of jumps

I tell young artists – and not just young artists: if you follow what’s in your heart, it’s gonna lead you to every situation, every person, everything you need in order to grow. And it’s especially important as a creative person. My sculpture, my artwork, led me to my wife, Patricia – and led me to this land. I didn’t know I was going to come here. My whole life has been a series of jumps. So this is where we landed…

(below, Andrew’s sculpture, This Man Who Flies, Laila, Patricia and Andrew)

When Covid hit, Patricia and I realized that we could no longer keep our gallery in Lenox open (DeVries Fine Art International, Inc.). So my thought was this: what do I have, what can I do? We were out of the gallery by May 1st. And the Sculpture Trail was begun right after that – in May of 2020. But I had been thinking about wanting to create it for most of my life, ever since we moved here to Middlefield in 1985. Actually, I had never had the time to do this when we had the gallery going. So once again: the perfect order. There are blessings…

The whole property consists of 15 acres, right alongside the Middle Branch of the Westfield River. The Sculpture Trail currently contains around 30 pieces of sculpture, mostly my own work, but also that of some of my artist friends.

(at left, Andrew with his wife Patricia)

in the ballet studio

This piece here is entitled The Other Side of Eden, which is where all the visions of my sculptures began. It was in a ballet studio that I first began to draw dancers. And that’s where I was watching my friend Brian as he was doing a grand jetée from the diagonal and he hit the wall on the last one. But what I saw was this: I saw him going through the wall. I didn’t see him – I saw the sculpture.

If you look at the piece, one side is more highly modeled – you see him straining, the eye is closed – and on the other side he’s smoother, he’s broken through, his eye is open. I saw the piece – finished – complete in my head, at that very moment. That’s how it always is for me, except for when I have a commission for a portrait. This particular piece has now been done in four different sizes, culminating in a 15-foot version, as I first imagined it in my mind. That one is now located in Ann Arbor, MI. 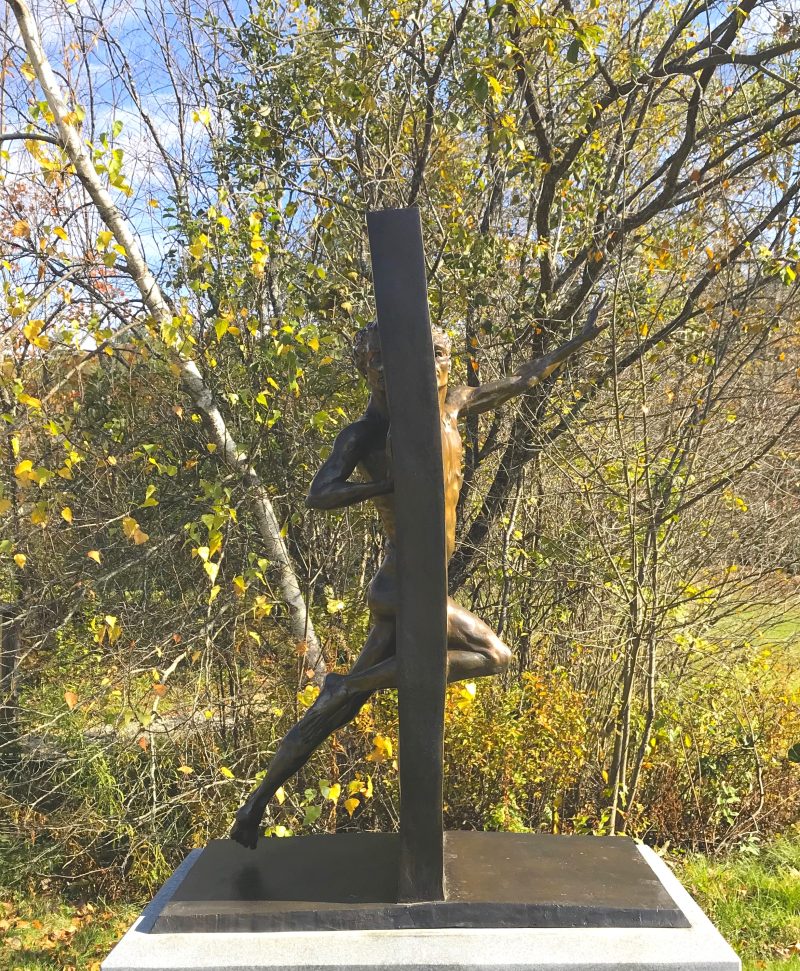 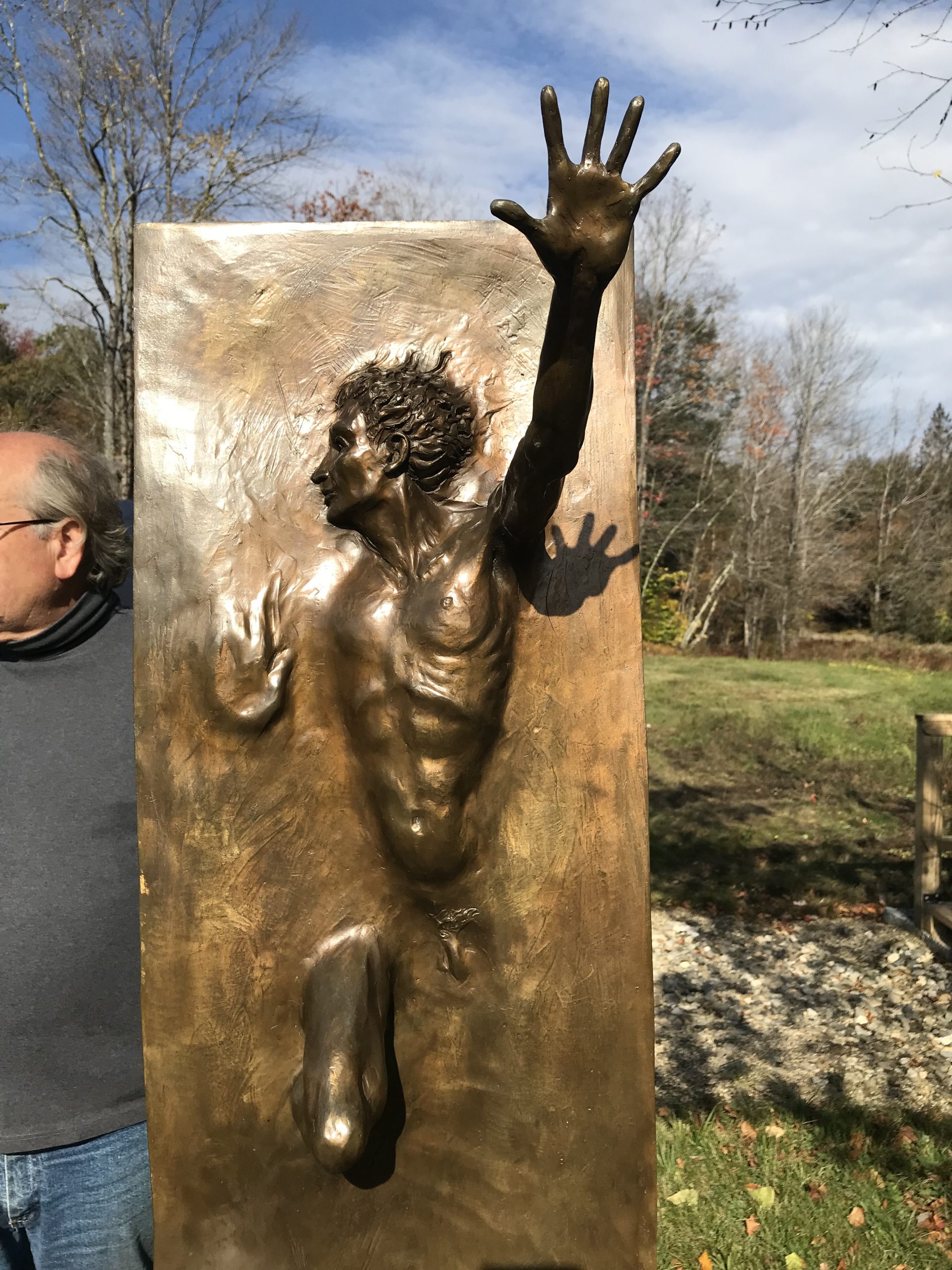 This area used to be known as Smith Hollow because there were nine families of Smiths living within it. When I first moved here, Ralph Smith and his brother lived just up the road, and Ralph became my best friend. I have no idea how his dad farmed this place – you can’t put a shovel in the ground without hitting a rock.

There are still stones here – everywhere! Nearby, in Blandford, there’s Chester Granite, which produces all of the granite plinths which the sculptures rest on. And there was a soapstone quarry here in Middlefield, up on Cone Hill. Some of the rock pieces I dug up here on our land were soapstone, too. It’s a very pretty stone – a lot of it here has iron inclusions in it, so it is not what one would carve.

When I’m trying to place the sculpture in the Trail, sometimes it’s clear immediately: that’s exactly where that has to go. And I knew that this next one had to be placed among that cluster of stones. It’s called Götterdämmerung (Twilight of the Gods), but it has nothing to do with Wagner’s version. I was reading a piece from Sir Kenneth Clark’s “Civilization” book, which was very influential to me as a young pup, where he talks about Rodin’s work being at the end of the Romantic Period, emphasizing the tragic part of Nature in Life – and the way it was portrayed. Upon reading that, I saw this image. 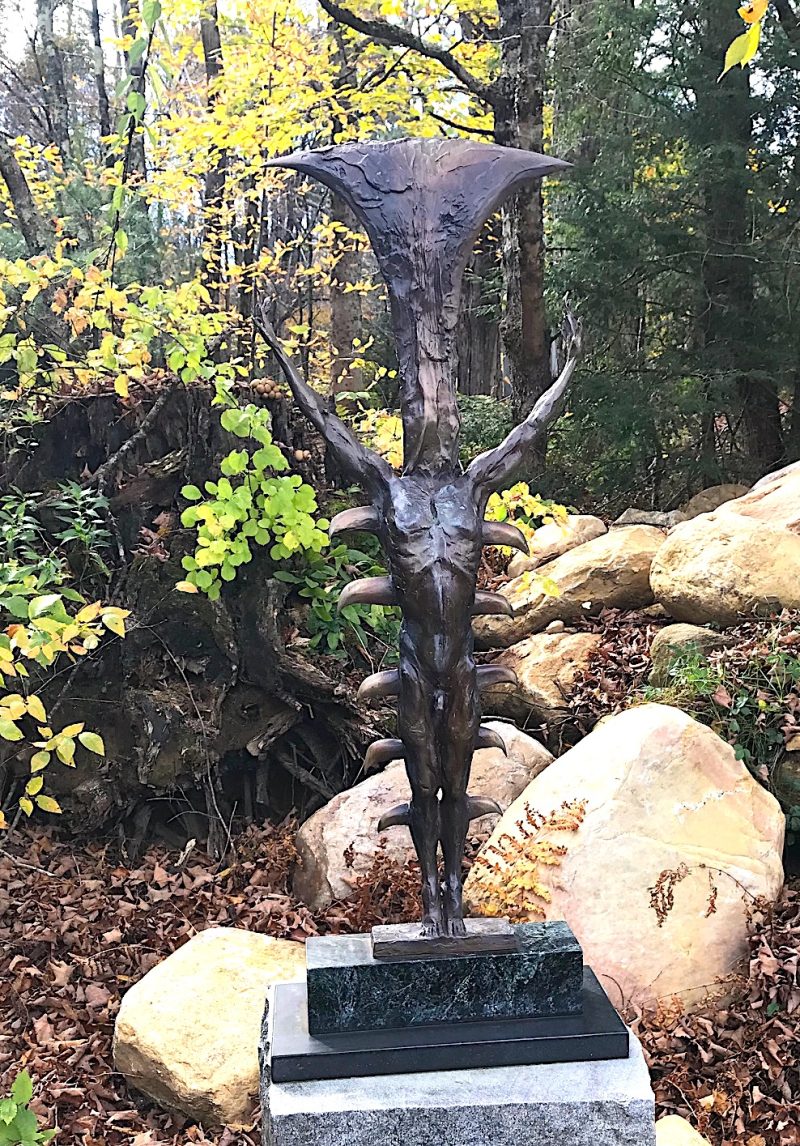 Götterdämmerung (Twilight of the Gods) 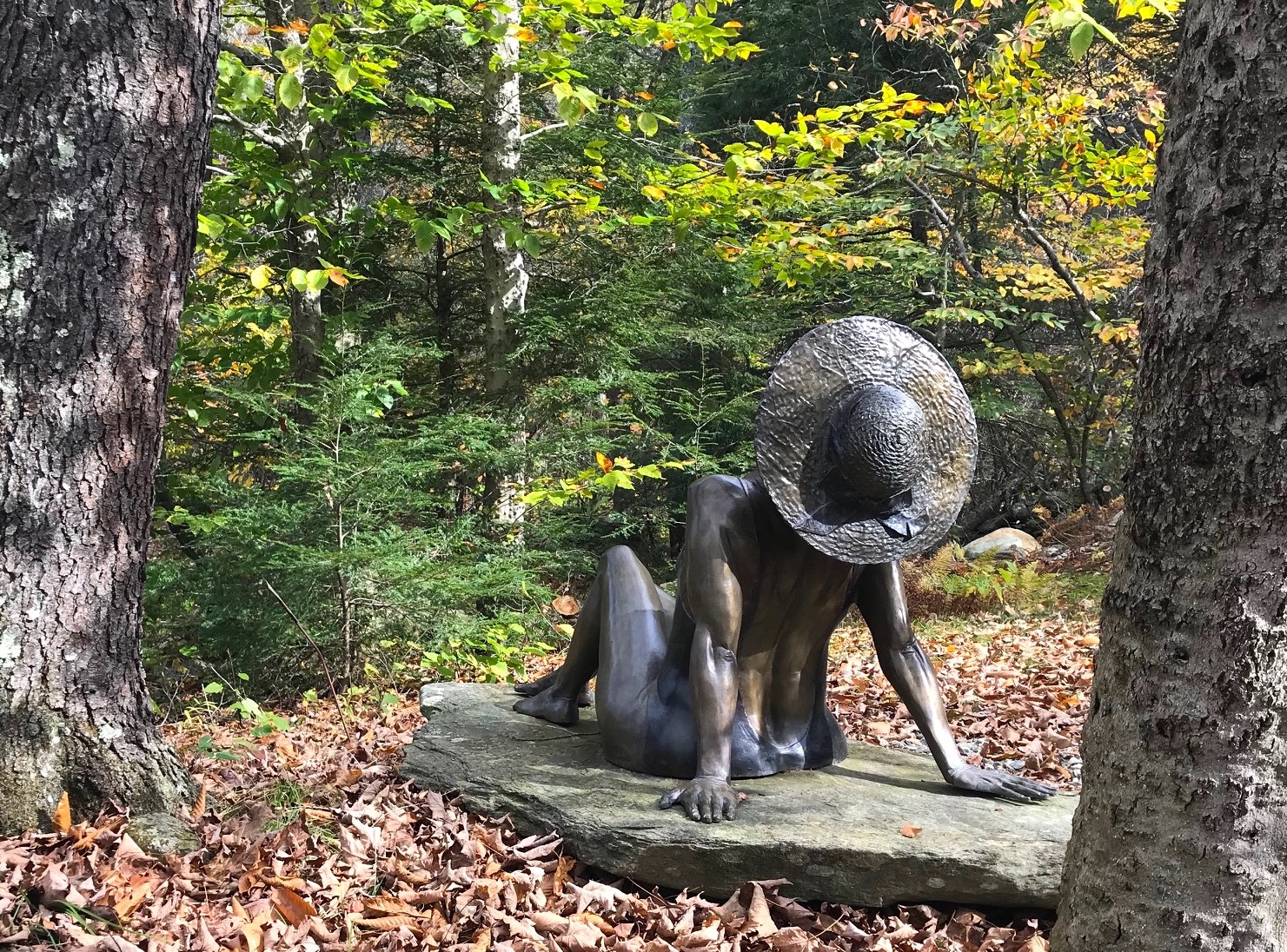 I believe in miracles

We all have challenges in our life. Patricia and I were talking about that just earlier today. Even though difficult things happen, they’re often the best things.

While I was in the process of completing a large sculptural piece there was a fire here – and the studio burned down! I needed two last pieces that were in the ceramic shell mold, ready to be poured. So the next day I went back in (as I’m sure many people do after a fire, looking to see what’s left) – and those two molds had survived! They were dirty – I had to clean them off and blow them off, but I was able to pour them and finish the piece. And then the whole process of rebuilding the studio began. I believe in miracles…

how we choose to look at things

Michelangelo once said that his work was great because of the details. Now, he wasn’t so much talking about details like here’s an eyelid – he’s talking about the modeling – the strength of the forms. When you think about sculpture, sculpture is line – but it’s 360 degrees all around. And that’s what makes it so difficult for many people, because people don’t tend to see work three-dimensionally. When I talk to people who love sculpture (I don’t know if it’s something in their brains, or it’s just me imagining it) – they look at things differently.

When you think about it, just look! – there’s so much depth in everything – and if you concentrate just on the ground, you miss that. It’s all about how we choose to look at things. And it really is a choice. Our greatest gift – as people on this earth – is that choice. And a lot of people just don’t even think about that. They just kind’a go on. That’s one of the things art does – and travel: if you start looking at things – and you start to understand that idea of choice – (sometimes it happens unconsciously) you start seeking it out. Or maybe you read something – it all depends on where you’re going with your head. There was a book, “The Untethered Soul”- and the one line in it I always remember is: you can choose to be happy. No matter what happens: you can choose to be happy! And I go: WOW! I know I’m always gonna have problems – just yesterday I was up fixing the roof – and that’s not how I was planning to spend my day – but I choose to be happy.

Audio of Andrew breaking into a hearty laugh on recounting a tale about the exhibition and creation of his Venus torso sculpture, seen below. (photo by Andrew DeVries) 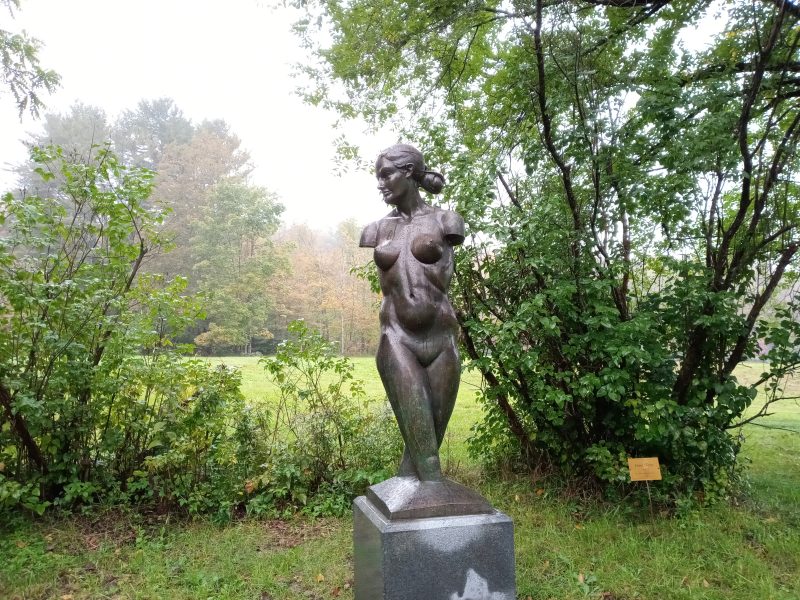 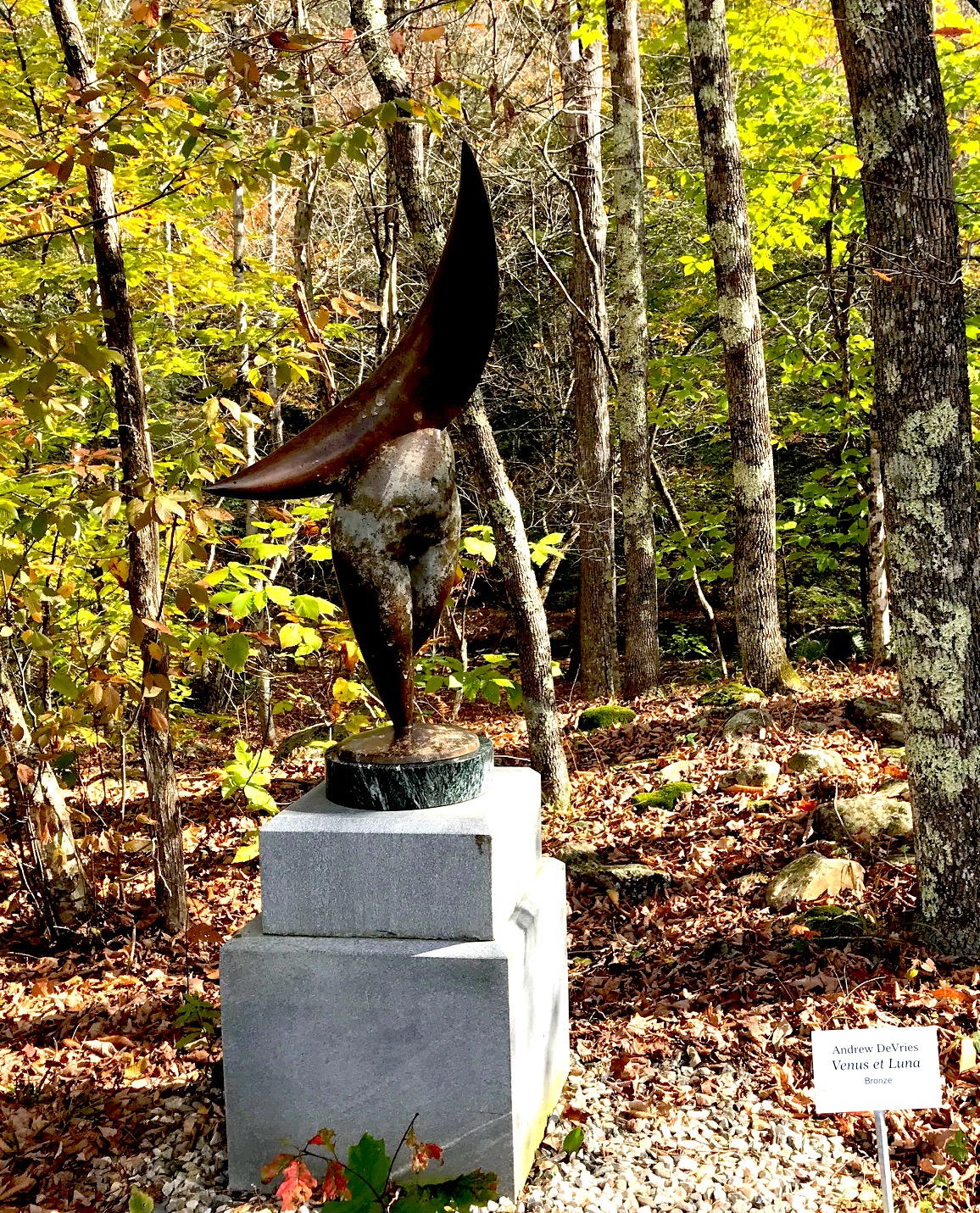 Here we have Venus and Luna, which I’d seen in the night sky. It was one of two pieces that I had done at the American Academy in Rome.

I had the great fortune to be a visiting artist there because of my friend Elliot Offner. Elliot was senior professor at Smith College, and at that time another professor from Smith was the Director of the American Academy.

And it was just glorious because I could work in the studio in the morning up until 2-3 in the afternoon – and then go explore Rome.

the future of the Sculpture Trail

My hope is that eventually either we can find someone who will love the property enough to take it over and maintain it – just like the Trustees of the Reservation do with the wilderness sites. Or maybe some other similar organization could take it over. But that will only work if they can somehow make a profit by maintaining it. You don’t’ have any control over land unless you can get it into a trust or a foundation.

I had always dreamed of creating something like this Sculpture Trail – so now I’m beginning to fulfill that vision. Yes, I own the land, but I feel more like a caretaker. As I do about the sculptures. Of course, I’d like to see it continue in perpetuity. Working in bronze helps! To a degree… Bronze can last for hundreds – maybe thousands of years. But the patinas have to be maintained – I regularly wash the sculptures and clean off the bird droppings (the art critics!). Once or twice a year I re-wax them with a coating that helps to maintain them. But I do worry about what will happen to it all when I’m no longer here.

And I mow the area once a week to keep the path clear. But I let the meadow grow wild for the bees and the pollinators. One of the things I hope for the Sculpture Garden property is to have even more flowers – and have it be a true pollinator place – cuz God knows, they need it. Last fall I planted 500 daffodil bulbs all over the field! 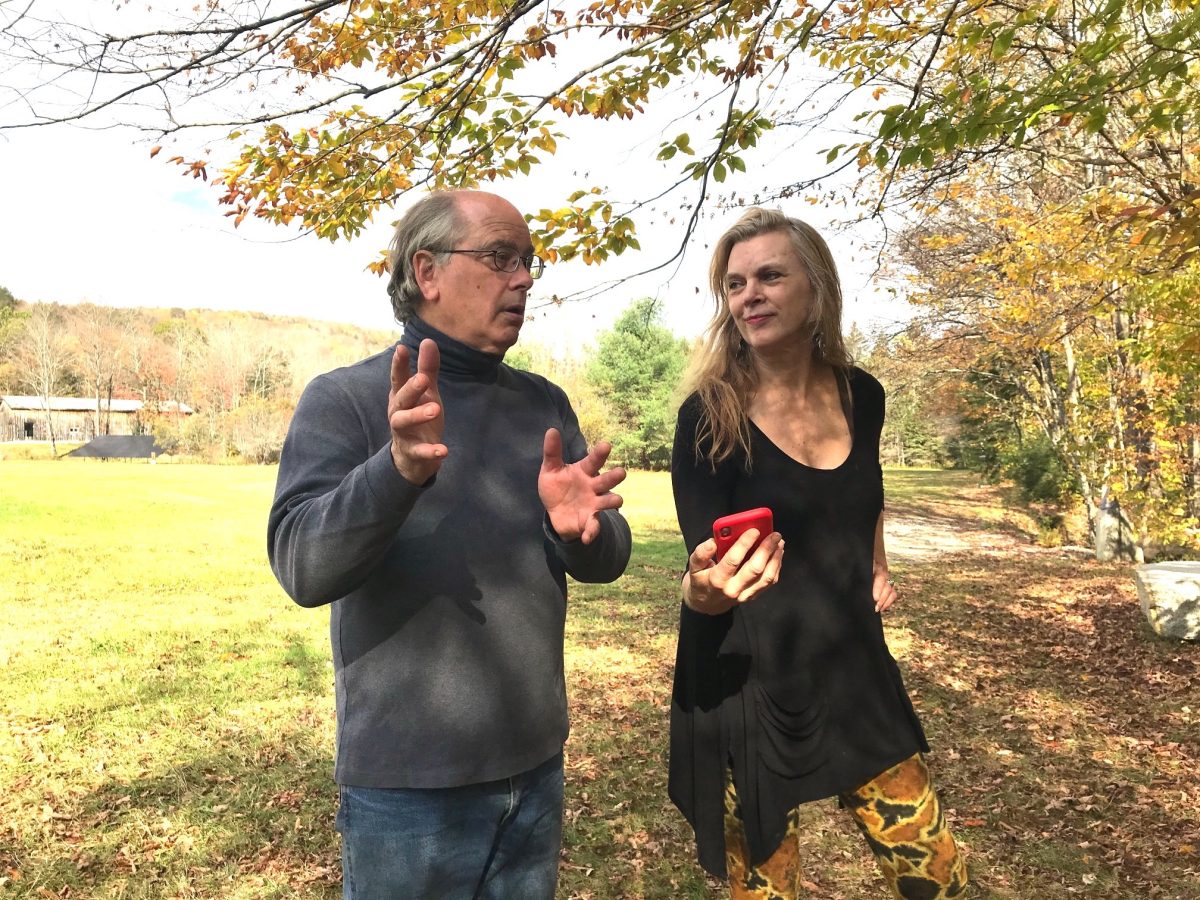 Andrew, being interviewed by Laila on her iphone

what is your destiny calling you to do?

In the process of creating this Sculpture Trail, Patricia and I have discovered so many aspects to the property that we really hadn’t thought about before. And we appreciate it so much more, because we walk it almost every day. Eventually I’d like to have some benches here – maybe a gazebo? – and a bar? – and there will be a little trail so people can walk through – and more sculptures as well.

Right now I’d say that the Sculpture Trail is only about 10% complete. I don’t have a vision of how it will end up, like I do with my artwork. The sculptures show up completed in my mind – my hands just have to create them. Whereas with the Sculpture Trail- it’s always evolving. Like right here, there’s a rock – and eventually I’d like to have some wildflowers growing around it.

I think about the land this way: you have this beautiful property and you want to share it. This is part of our job as artists – to share! It’s just a matter of asking yourself: what is your destiny calling you to do? I think about that: what am I put on earth to do?

for more on Andrew DeVries’ life and art, visit: andrewdevries.com

(below, Andrew’s sculpture, This Man Who Flies) 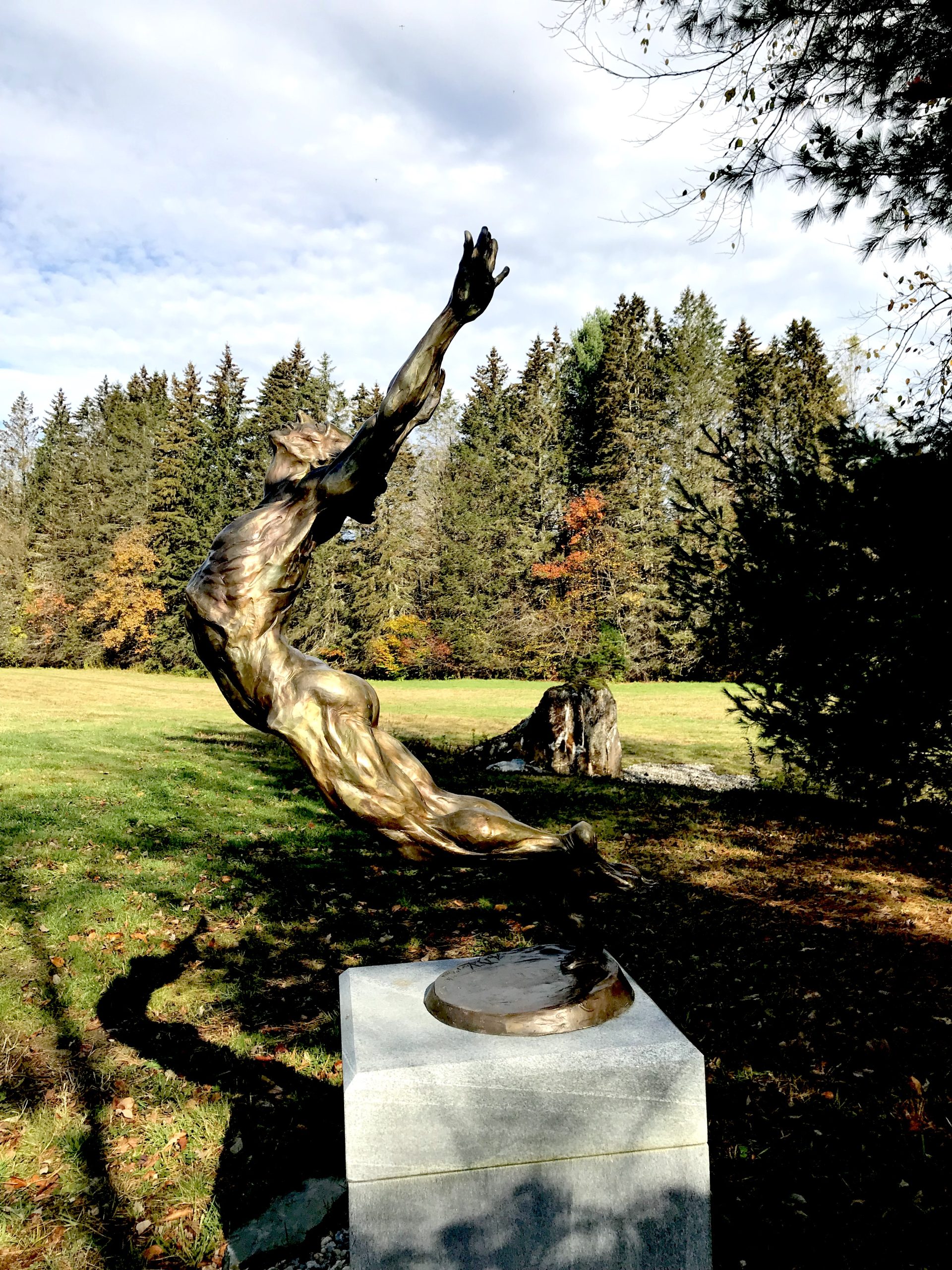