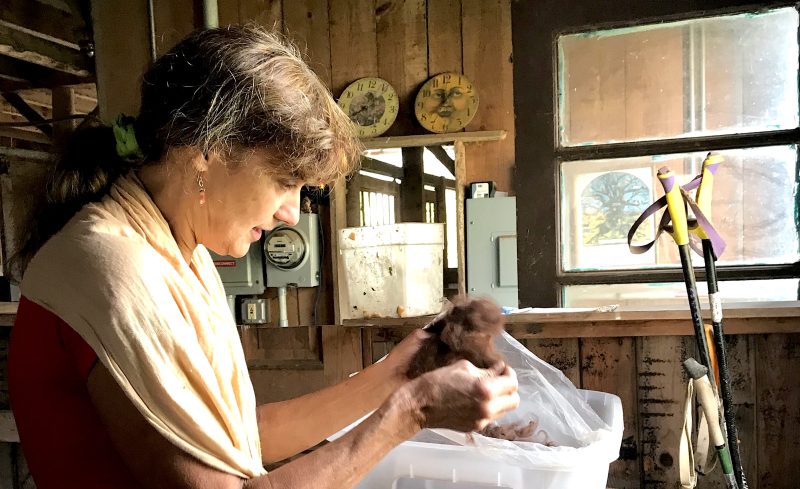 Mariam sorting wool from her alpacas

Mariam: Stay grounded, stay focused — we only have a fixed amount of time here, right? Act as if you’re moving back to heaven! What would you do if you knew that you were going to leave – wouldn’t you want to finish your projects as quickly as you can? – do the things that really resonate with you, simplify your life and leave behind a wonderful legacy? 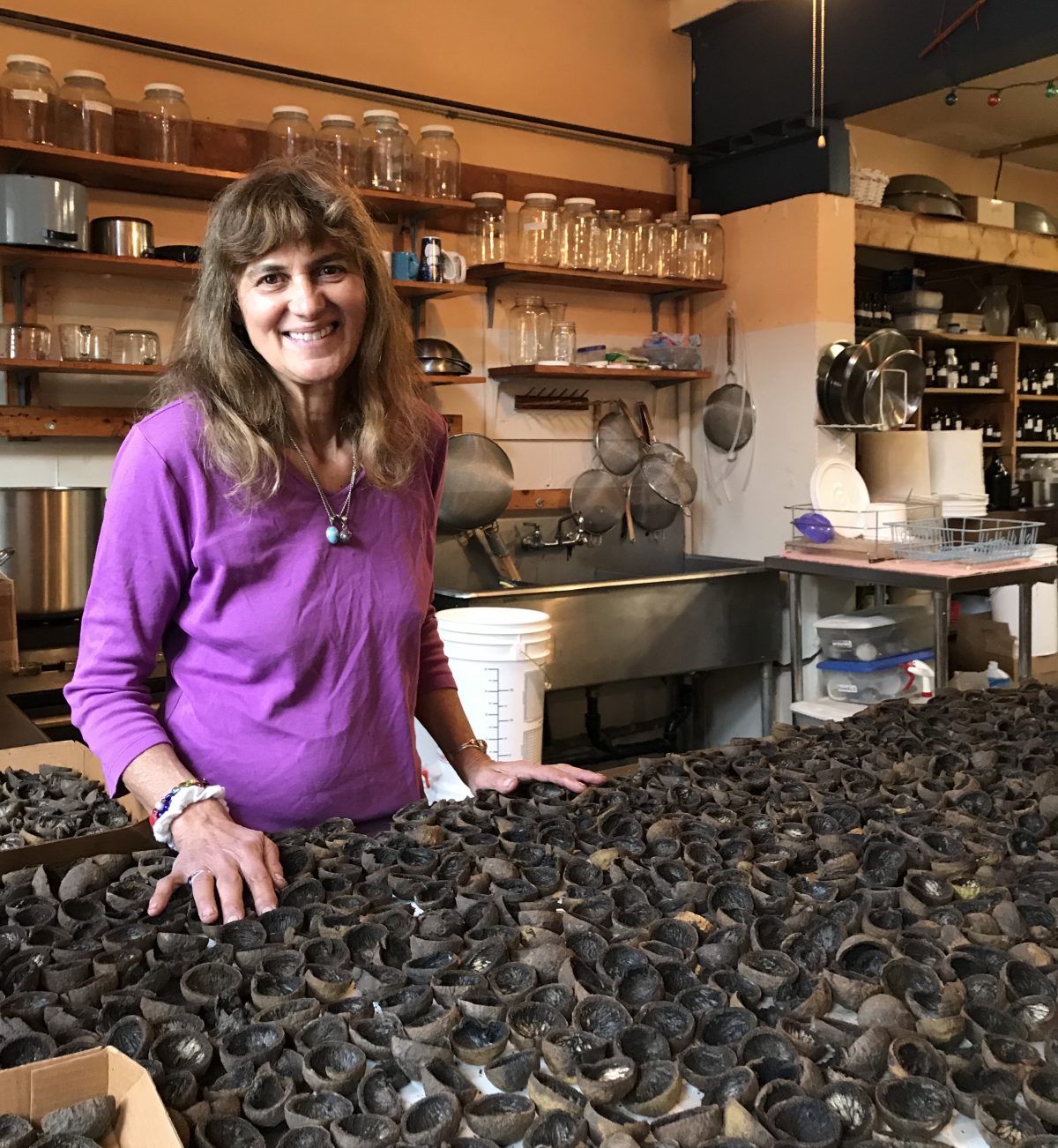 in the kitchen/laboratory of Wiseways Herbals, surrounded by walnut shells

I came from a large family that moved many times to follow my father’s military postings, one of which was in southern Germany near the Zugspitze mountains. As a young girl I happily spent countless days hiking and exploring the beauty of the magical German forests and Alps. Since that time I always loved being in nature and hoped to someday live on my own farm. I started studying herbal medicine in 1973 when I had several personal herbal healing experiences that convinced me that herbal medicine was both powerful and natural. 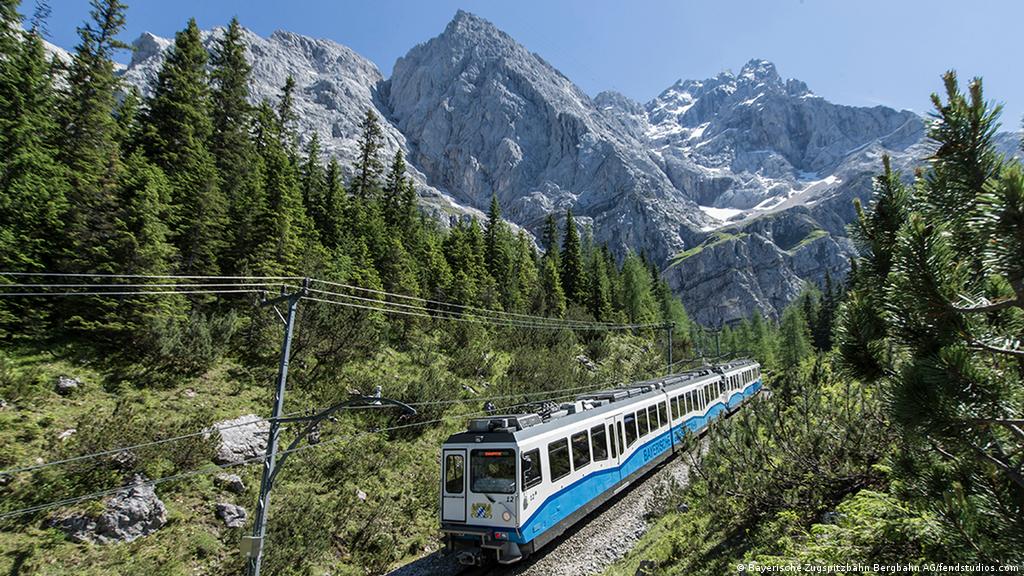 the Zugspitze (“traintop”) mountains in Germany (photo from DW Travel)

When I first started living in Western MA, I was doing midwifery and waitressing and whatever else I could, but after a while I realized: this isn’t working. In August of 1987 I attended a spiritual configuration for two weeks called the Harmonic Convergence – a spiritual opening of a remarkable portal for humanity. On the last day of the convergence, I meditated out in the field and saw a compelling vision: an upside-down crescent moon and orb. At the time, I had a small herb company, named Isis Herbs, after the Egyptian goddess of unseen esoteric mysteries.

A month later, Gordon Michael Scallion, who identified himself as a futurist, told me that my vision was the ancient symbol of Isis. He offered to create a necklace for me based on the moon-and-orb design to enhance my inherent talents. He used Shattuckite, a rare lapis, and a moonstone. I wore it consecutively for ten nights, and every morning I would wake up with new ideas about herbal formulas. Through meditating, I called in the clues: it’s like pulling on a kite string. Sometimes the whole piece does not appear right away. So it’s our job to work on it diligently, to manifest our ideas. I set out creating herbal products right away.

what is the New Age anyway?

In January of 1988 I was invited to speak as an herbalist at a conference entitled, What is the New Age Anyway – during a snowstorm! I introduced thirteen medicinal and body care products under the new name, WiseWays Herbals. I launched the company there and then. The products were labeled with chart pack lettering. (It’s when you peel letters off and stick them on – this was way before the internet!) The wife of the buyer of the herbal products for Cornucopia was there (a natural wellness store in Northampton). She suggested I show this interesting product line to the owner. I did and he picked up the line — that was the beginning of getting my products into stores.

Later that year I brought the products to another health food store, Bread and Circus, later to become Whole Foods. The wellness product manager was one of my students at my herb school. She told me: you need barcodes and a distributor. The distributor I found, All Natural, has now sold the products for over 33 years.

from junkyard to herb farm

But I was still living in a small house, with Wiseways Herbals taking up my kitchen with lots of pots and beeswax everywhere. I really wanted a more substantial, enduring home for the herb business. So I asked the universe for a country farm, facing south, with flowing water in the backyard and room for plenty of gardens. In 1993 I was finally able to purchase just that: a peaceful, beautiful property in Worthington, which I named Singing Brook Farm. It became the permanent homestead for Wiseways Herbals. But in the 1950s this property had been a junkyard, with several cars buried in the fields. A clean-up was necessary before the start of its new incarnation as an herbal farm.

I happily grow herbs, roses and organic food on this fertile land. The property is nestled in-between lush forests, open pastures and flowing water, over which I created a Rainbow Bridge (seen below). In addition to growing herbs from the numerous gardens, we buy herbs from all around the country. By 2010 I had created more than 200 herbal products. My farm became known as the hummingbird house – since many people attended healing ceremonies here led by native tribal elders, making lasting connections.

If I hold to a dream with pure intention, it becomes manifest. Sometimes it takes a while, even years, but I learned to stop trying to force it. And miracles do happen. 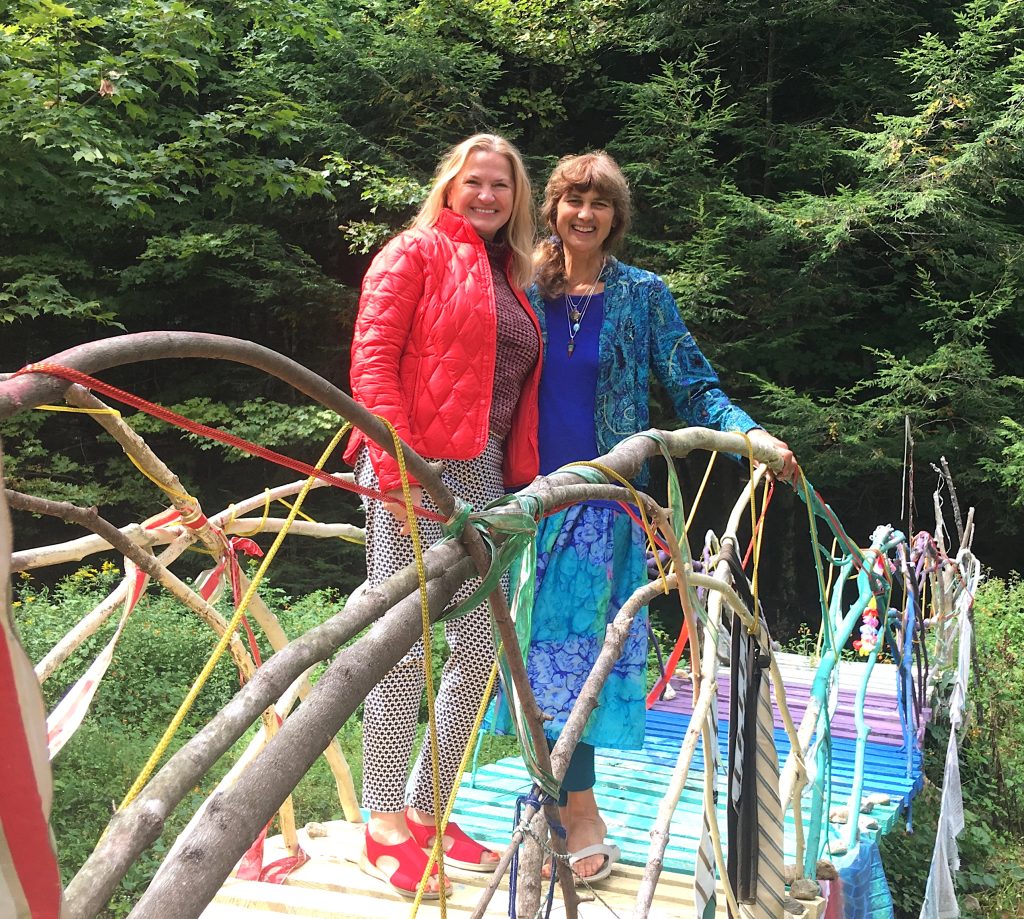 On my herb farm I began raising sheep in the early 2000’s. To make sure they were free of predators, I brought in three llamas – I love them. I use their wool to make different crafts, and I’m involved with a spinning guild where we get together to knit, spin and chat. I presently have three llamas, two alpacas, and lots of fiber, but no more sheep. 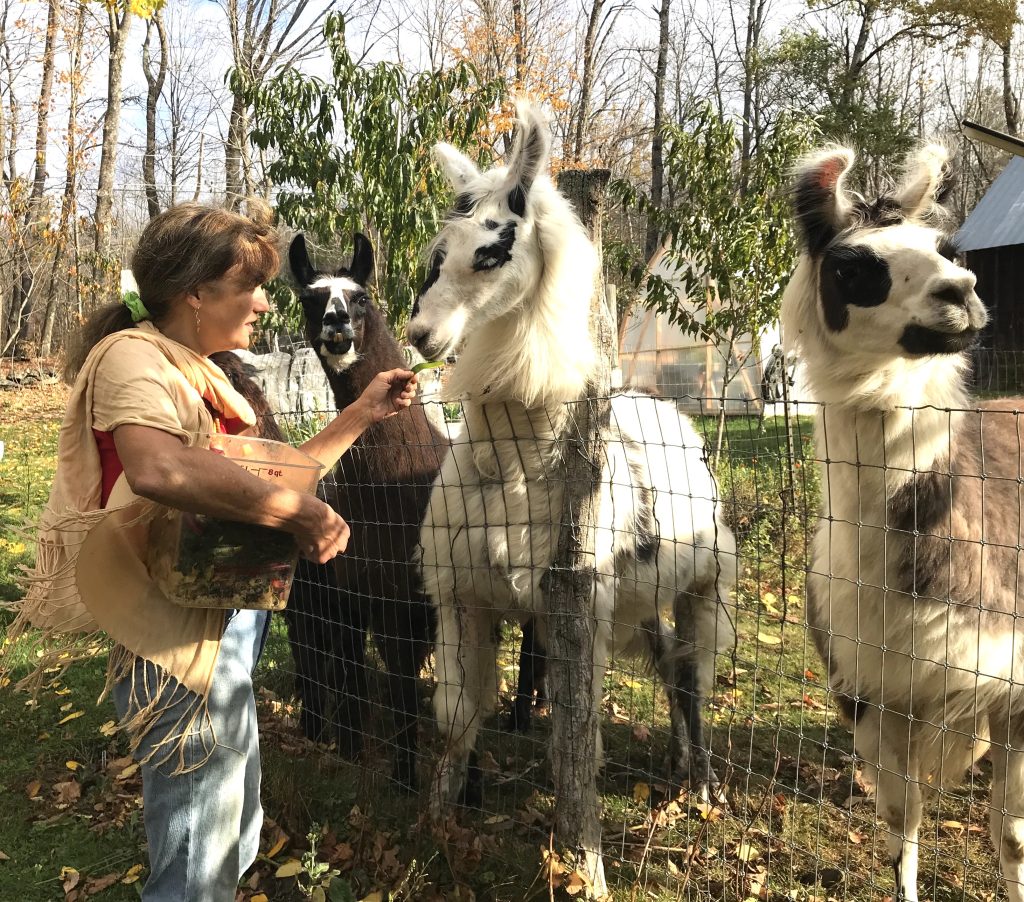 Whenever I am deeply immersed in nature, in the brilliant light of the full moon or in a raging blizzard or a deep crystalline icy freeze, inspiration flows through me. Often I feel compelled to write down in my journal the dreams, messages or songs I wake up with. This has led to numerous projects; writing books, performing and recording music, creating videos, and co-running a weekly podcast of visionary improv music, The Gaea Star Crystal Radio Hour.

Together with my fellow crystal seekers, we join forces with the faery and mineral kingdoms, animal spirits and celestial realms — to teach respect and love for the precious, planetary home we all share, Mother Earth. 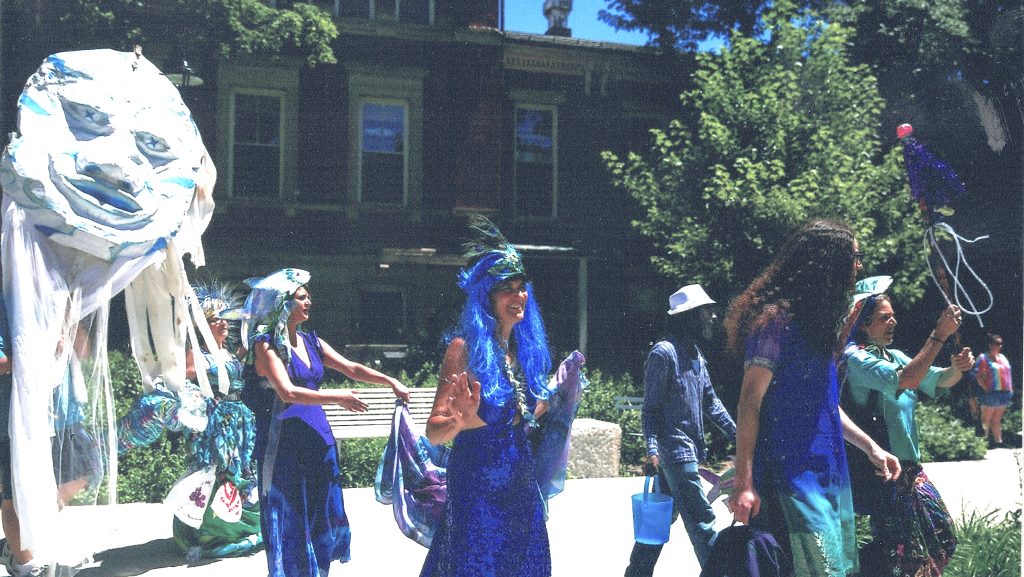 Mariam (second from left) with other activists, dressed to represent the water element, participating in Interdependence Day: a call to citizens of the world to take an active role in fighting climate change.

(photo by Sarah Crosby, 7/18, used by permission from The Daily Hampshire Gazette)

(some excerpts are from Mariam’s book, Blessed by Light Filled Love) 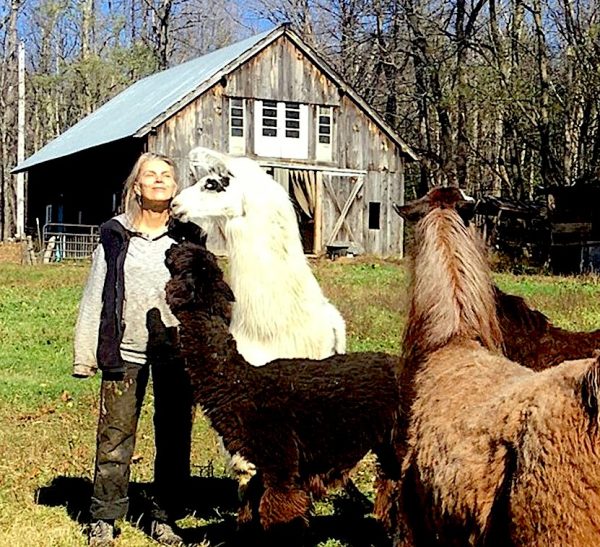 Laila getting nuzzled by a llama at Singing Brook Farm (photo, Jim Matus)