Our church hummed with the memory of the bell which cannot be unrung; from the wood which itself strummed with the energy of an ancient sun fallen over two hundred summers ago…

(from Steve’s poem: Our Church Was Warm – full text below; photo by Christos Galanis) 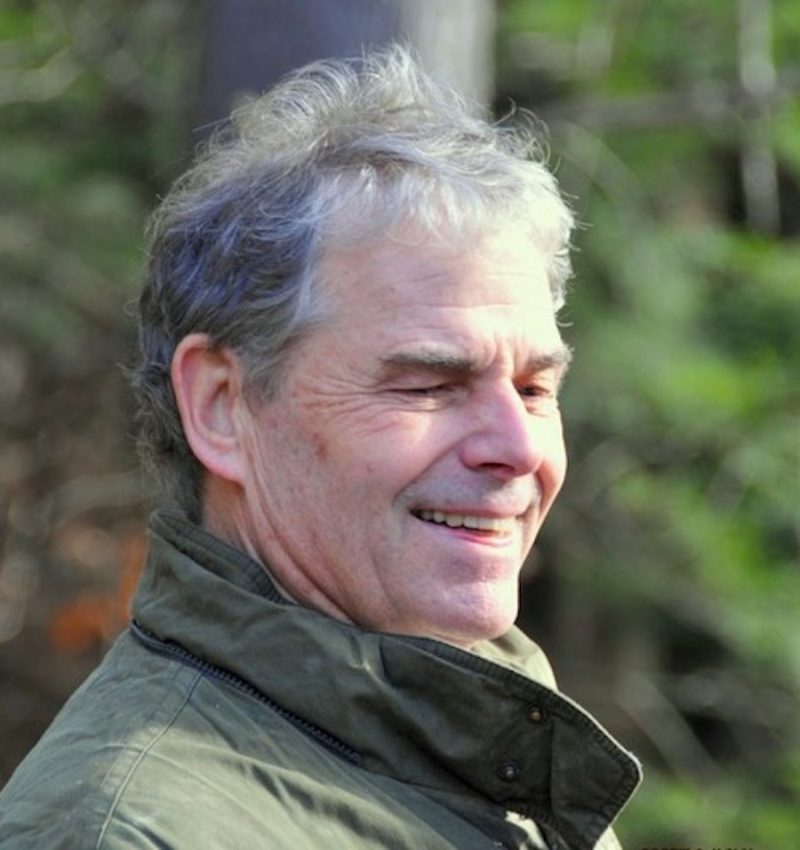 Here I am, speaking into a very futuristic looking device (the Blue Yeti mic), and between me and this cloth mask that a friend of mine made, my voice is probably sounding somewhat muffled. And yet, my eyes are not shuttered, and my ears are not stopped. I can hear many more birds than I can possibly identify. 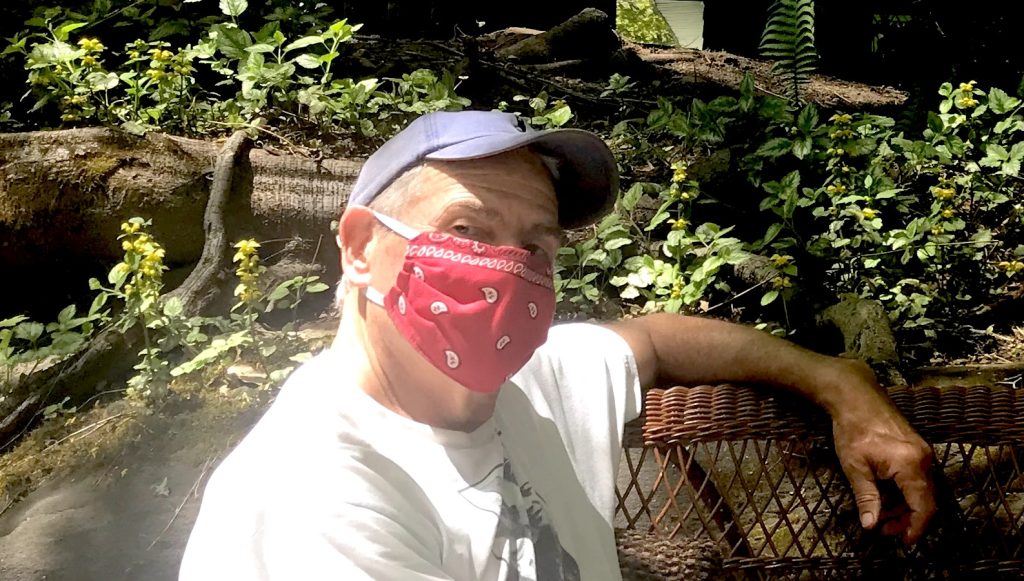 mine for just a while

So, despite all the grieving during this coronavirus, all this is still right here – was here – and will be here (please, God!), after we’re gone. This life is mine for just a while. The ones who have literally inherited from me a pulse – and their children – will enjoy all this. People I don’t know, people unborn, people I’ll never meet. Something beyond their natural Yankee cussedness attracted people to this place in the first place, and the native Indians before them. Life has been attracted to all this beauty, and will continue to be. 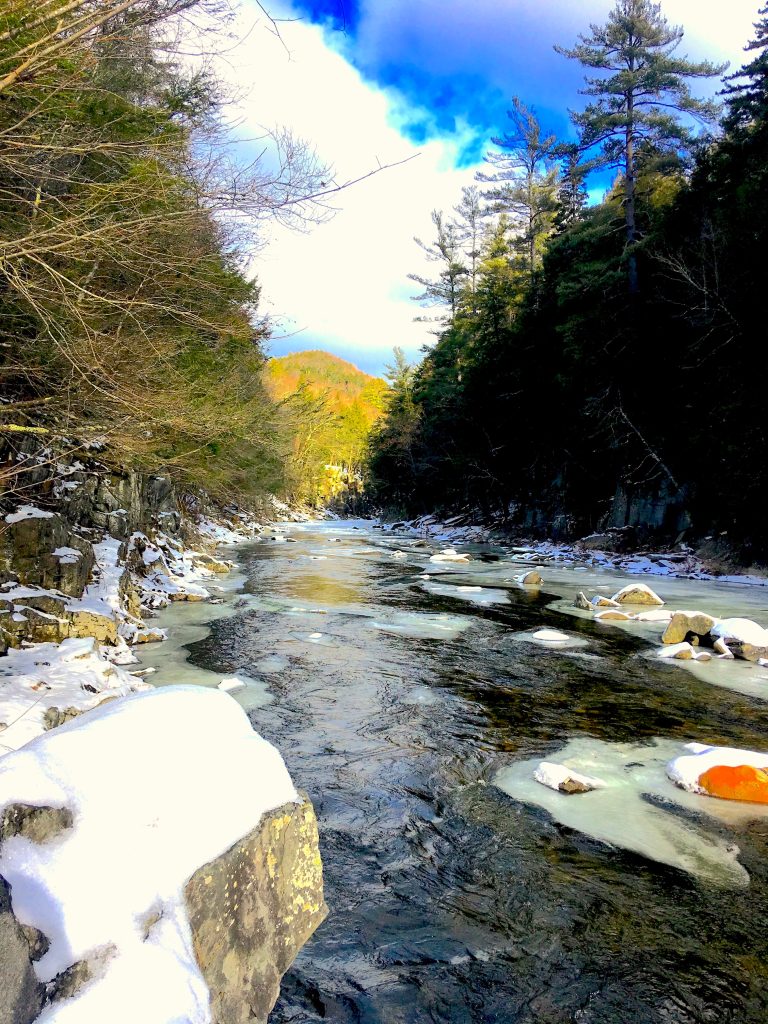 the Westfield River in Chesterfield, with Smith Pyramid in the sunlight (photo by Laila)

the fire at the church

On that January morning in 2010, when the West Cummington Congregational Church burned down, I was summoned by a neighbor just before 6am. It was clear and very cold, still pitch black. I found the fire chief crying, since he had just told his people: I can’t let you go in the building.

The force of the heat, those horizontal flames, was such that I don’t think you could have forced anyone into the building, so I was very relieved by what he had decided. By the time I got there, it was actually over, though they worked very hard to save the surrounding buildings nearby, which fortunately were not very close. No one was injured, but the news of the fire had already spread across the country. 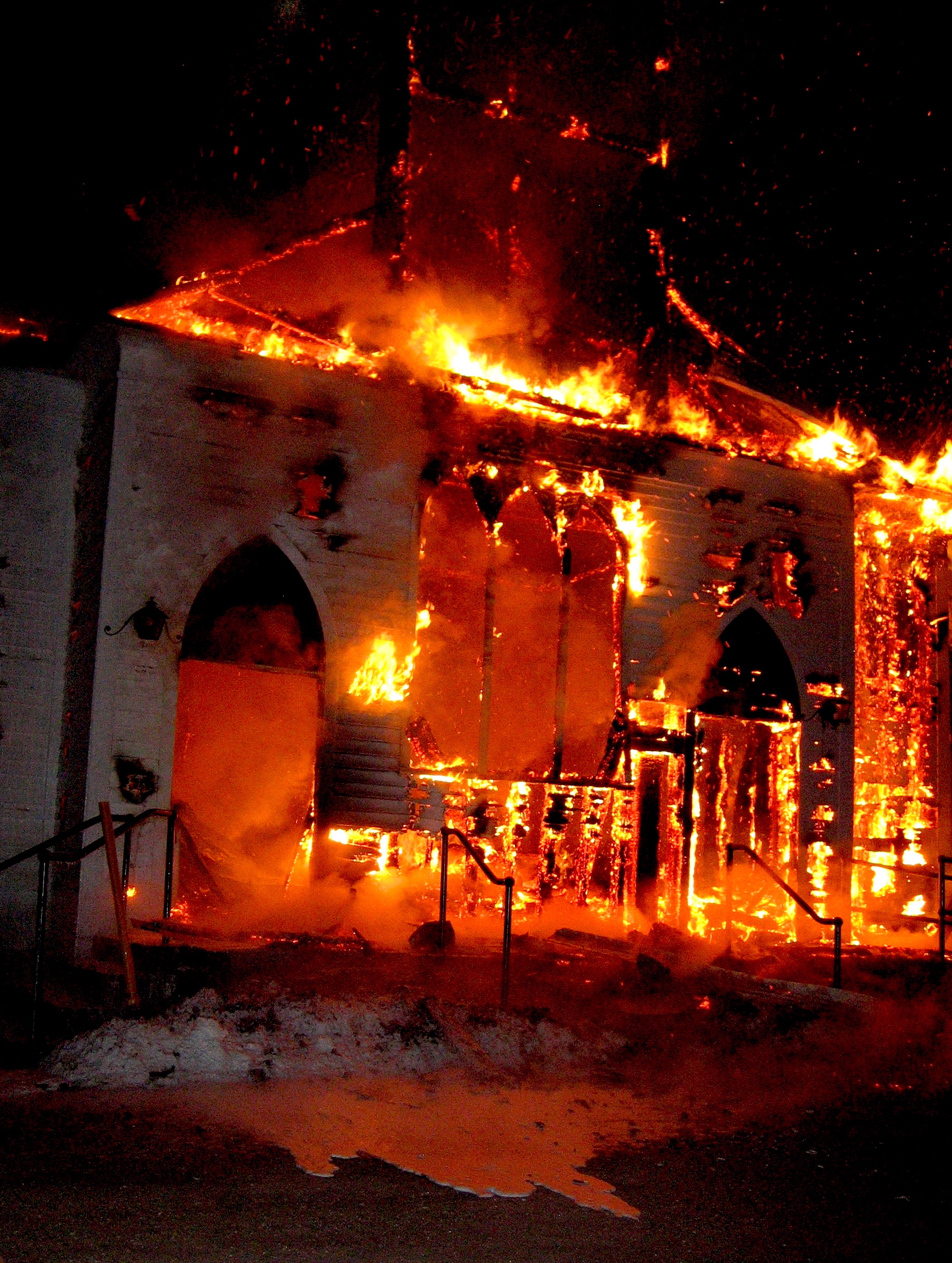 leaning on each other

The first phenomenon I noticed, beyond being struck almost dumb – was noticing the ways that a congregation continues to be a gathering of people who feel called – and invited – and welcome. And like any tight community, we lean on each other all the time: someone is getting divorced, someone’s father has died, someone has lost their job. So those in need lean on the rest of us, and that’s what we’re there for – being shoulders for one another. We each take our turns leaning, as well as supporting. But in this moment of loss, how did we manage to lean on each other all at once?

We had been privileged to live without a bomb landing on our land, on our country, in our lifetime. So we didn’t know what it was like for a community to be bereft in a moment. Out of that experience came many things. We still talk a lot about the new building – of the people who did so much work – and the kindness of strangers from all over the country. We sometimes forget the loss, although some of the older people in the congregation still keenly miss the old building, built in 1839 (seen in the vintage postcard below). There were some sharp disagreements during the process of rebuilding the church. Those wounds may heal, but the scars are still with us. 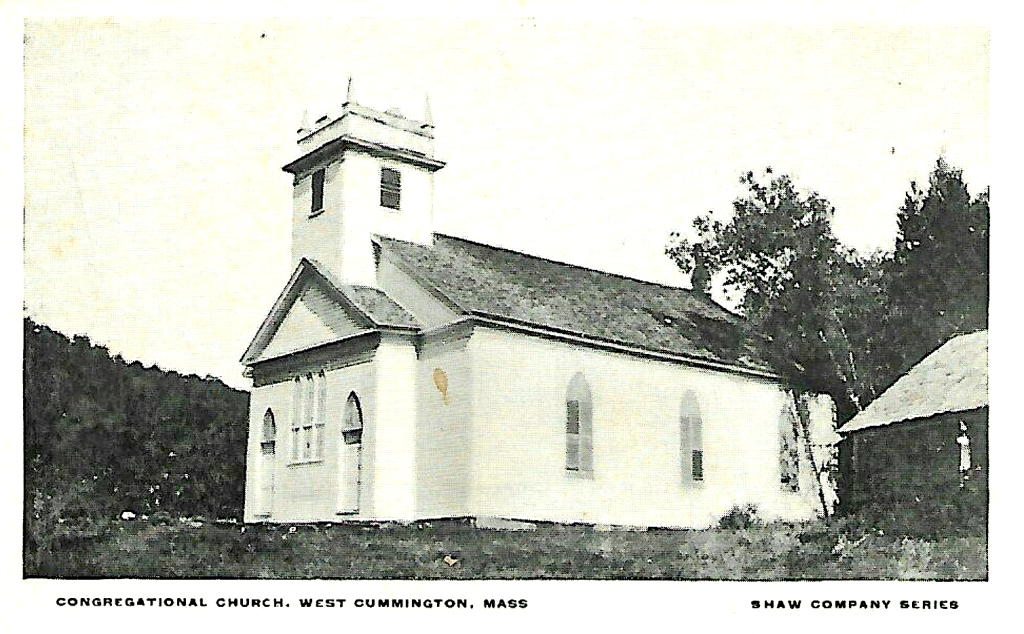 we’re all the congregation

When a large event happens in a church, some people leave. They feel devastated. They’re accustomed to experiencing the church as a place of comfort, not grieving. At that time – after the fire – the only comfort was being able to grieve together with someone.

I’m reminded of that loss by this coronavirus: now it’s universal – it’s all of us – we’re all the congregation. So we need to remember some of the lessons our congregation learned back then: a few people spun off, but the rest of us became closer. 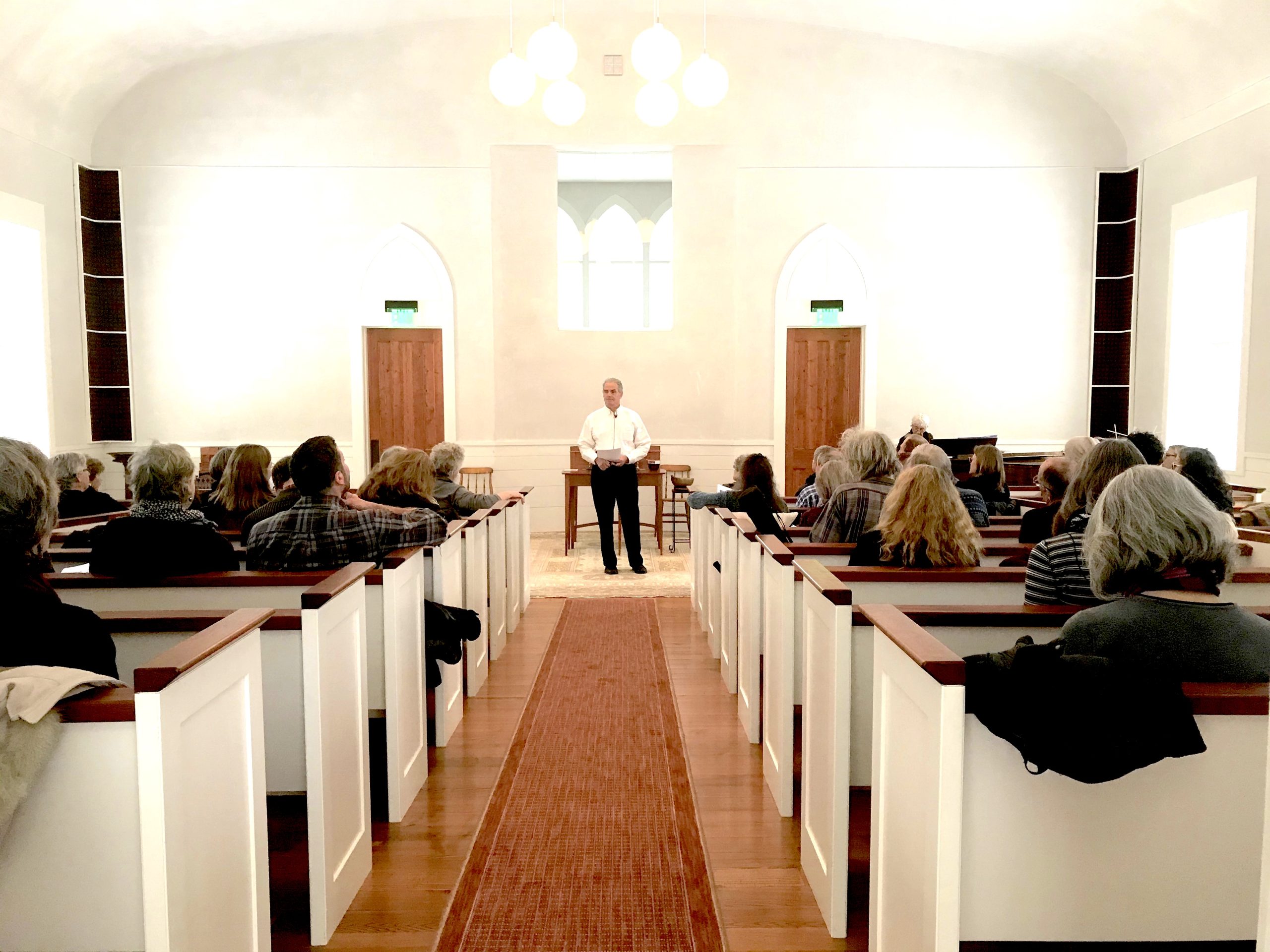 Out of being burned, out of being surprised, amputated and cut off, seared and painfully susceptible to infections and resentments of all kinds – out of all that comes stronger, newer green growth. The climax community* of the forests in these parts is mixed hardwoods, but they take a long time to grow. Before that it’s a whole new group that gets in: the first to dominate are the brambles, mostly blackberries, which attract the bear. And birds love it, making nests close to the ground.

In the climax community of the congregation we have some new leaders, and some new people who were very important to the life of the church. Not all have stayed, but at that beginning time when all was new and all that was old was lost, there was a lot more openness – a lot more sunlight. We were looking for people to do everything – and anything. Some remained, and remained very active, and slowly the old forms returned – maybe not the same old beautiful maple tree, but a different one – and over the next 100 years it will once again begin to resemble the previous climax community.

* climax community: a mature, stable group of plants and animals that is the end result of the succession process that lasts approximately 150 years.

I’m thinking, too, about our garden in Windsor where Connie and I have a fence to keep out the deer. There’s always grass that grows right up against the fence and it’s hard to mow it. So, since the new grass was still lush and wet, and the old grass was standing dead and dry, Connie decided to get a little propane torch and set it on fire. The wind was such that the fire went right around the garden, just as we had hoped. And we were very proud of this until one of my sons said: you do realize, don’t you, that the new grass there is going to come back three times stronger – you just fertilized it! 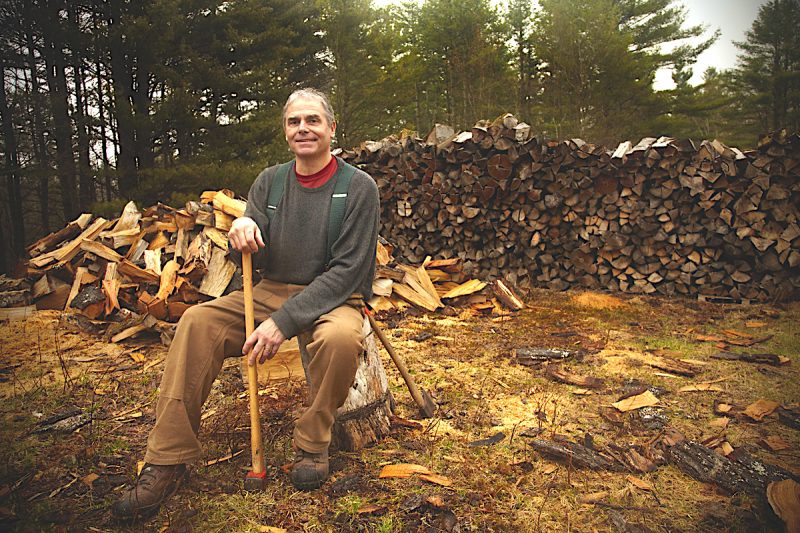 One benefit of the new format in which services are currently being offered at our church in the era of the coronavirus is our bi-weekly “church-in-a-box”. Members are forwarding it to their friends and those friends are asking to be on the list of recipients, so we’re actually reaching a broader community. The music being recorded by the musicians of the congregation, along with my preaching, the general tenor of things, our unusual sense of what is scripture, which draws upon so many sources – all of this is spreading – comforting and inspiring people that we could never reach on any given Sunday. (Currently services are in person or via zoom, depending on the covid protocol assessed by the deacons of the church.) 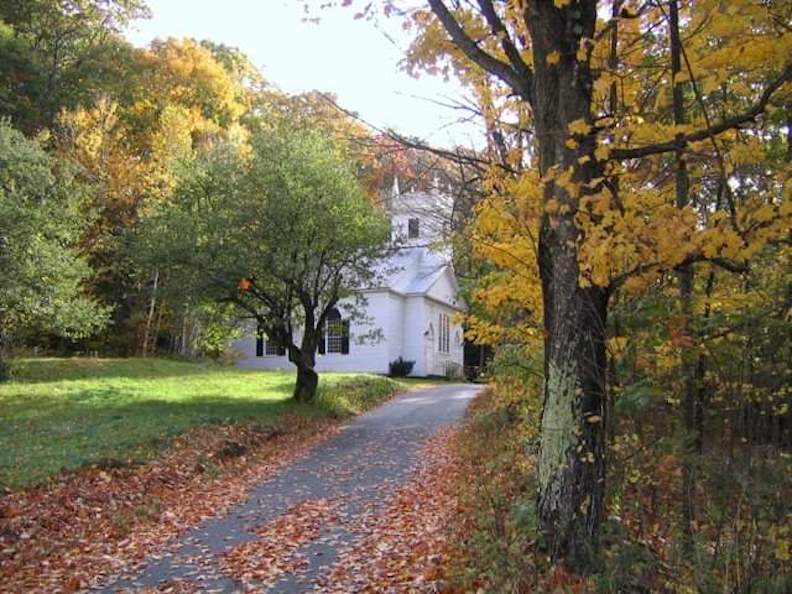 the rebuilt “Church on the Hill” (WCCC archives)

There is a great virtue and a great necessity in all of us being in the same place at the same time – to experience it together. One of the things I cannot put words to (which means it’s really true) is when the congregation sings certain songs together. I will go and get right in the middle of the group – close my eyes and stop singing – listen over here to my left – and over here to my right. I’m looking around at the people and what is passing through them – from their lungs and their hearts and their faces – faces whose stories I’ve been familiar with over the years. It’s a privilege to be with everybody in that way. Did I need it to be taken away to truly appreciate it? I don’t know, man (laughter) – but I do truly appreciate it once again.

For more information, and to access videos of services, please go to: 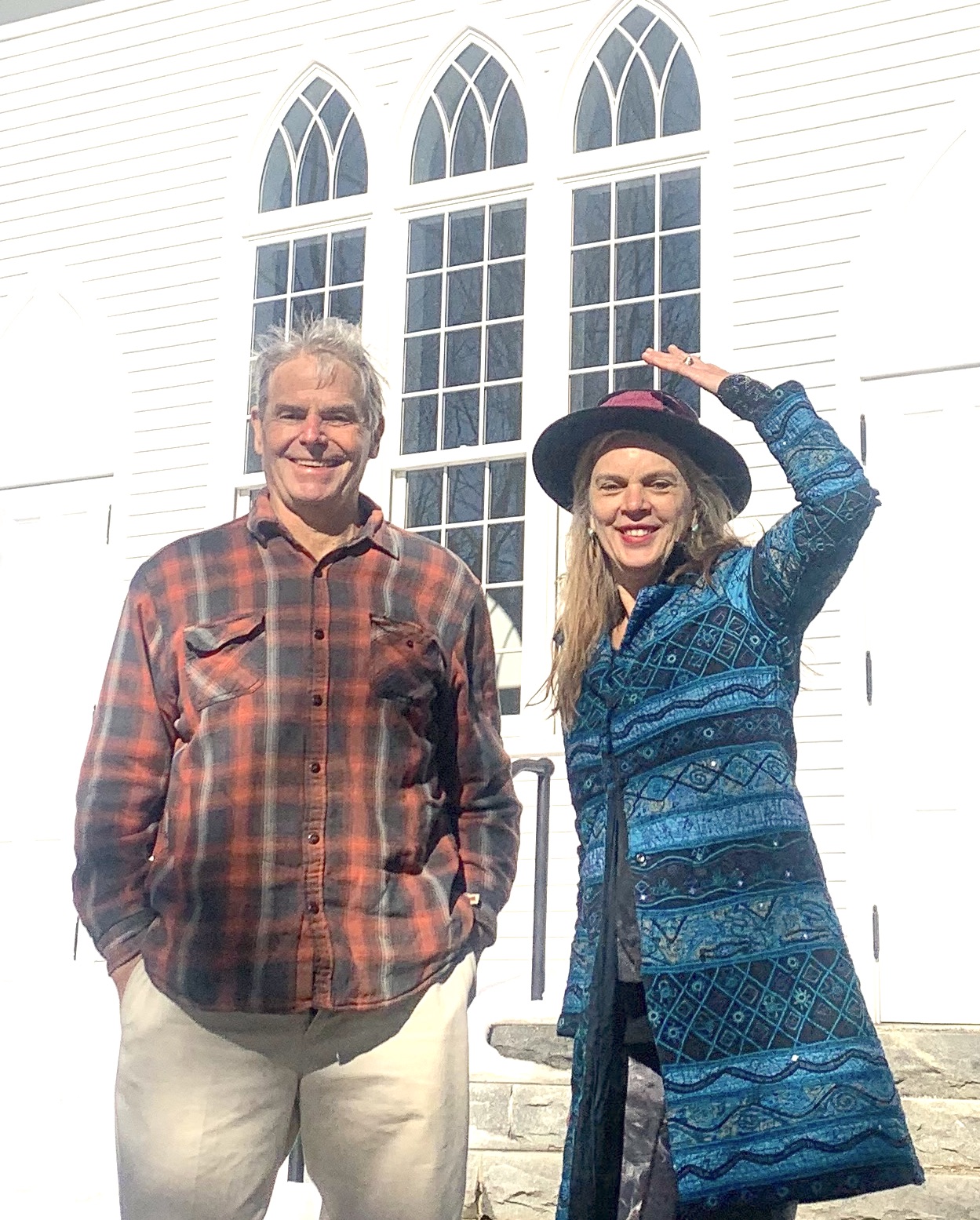 Steve and Laila outside the church (photo by Jim Matus)

Our Church Was Warm – Stephen Philbrick

Our church was warm, they always said that,
in the marrow, in the rows of creaking pews —
“her” place;
or where Tom sits, in the front on the side near the door less used
because of his restless kids.

Our church glowed
with Christmas candles
and the happy friction of meeting bodies and prayers passing.

Our church hummed
with the memory of the bell which cannot be unrung;
from the wood which itself strummed with the energy of an ancient sun
fallen over two hundred summers ago;
and the bell’s pulse and the timber echo were home and history to us,
the drone our singing stood upon.

The wood remembered the lonesome pacer, praying after midnight,
let in by the open secret, the skeleton key.
The wood crackled to the rafters with the laughter of the damaged
— that’s us —
laughter played well here.
Our church was warm in our hearts.
Our hearts were warm in our church.

The old church burned.
Fire rose up out of darkness
and heat ate the cold early one winter morning.

The church rose with the fire and hovered over the foundation
we had rebuilt, really, in a crawl space, literally face down
under the complaining floor.

The old church rose with the fire
orange and transfigured,
even to those who knew her best,
and — God help us and guilt be damned — beautiful.

The old church rose with the flame
and then it fell.
Even the brave bell,
tolled for burials
and rung savage and amazed after midnight when the Sox finally won it all,
the bell that alarmed the village back in the day, in the night,
for fire or flood,
even the bell fell, broke and melted.

The hill ran with water
that the firefighters poured, poured, poured.
The water ran down the hill with our tears and froze.
The water finally worked and then the steam, it rose,
the night the old church rose and burst.

Our church did not burn, it glows.